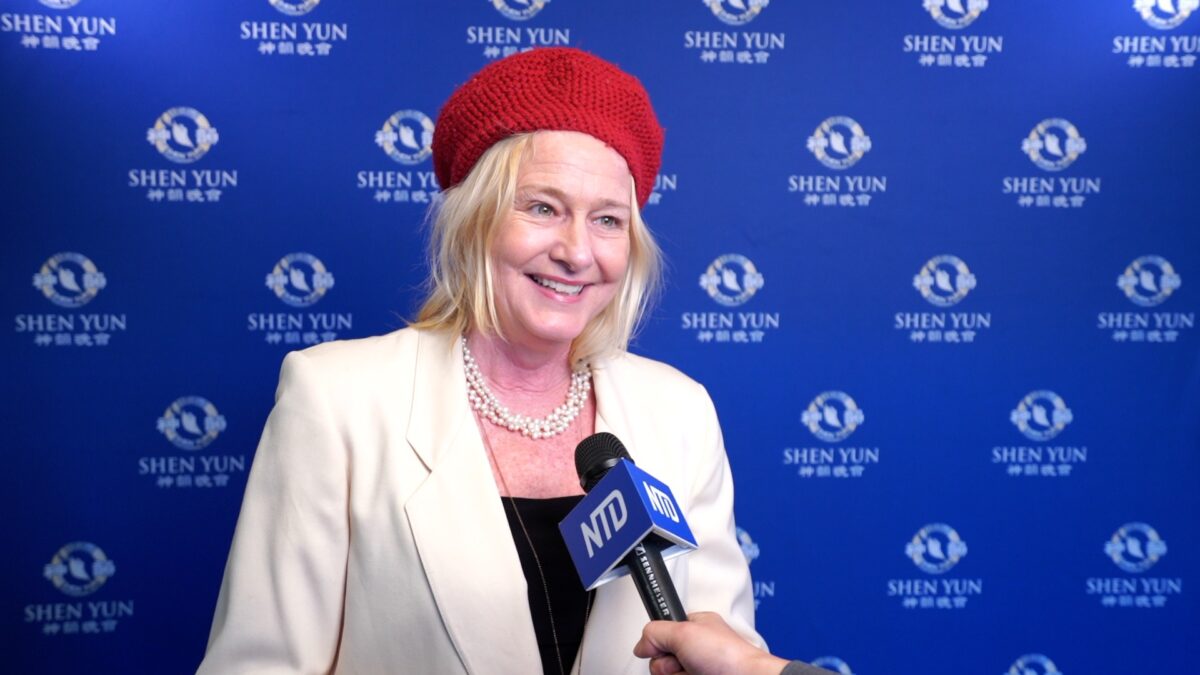 SAN JOSE, Calif.—Marleen Sullivan, a ballet teacher and executive director of a performing arts nonprofit, has seen, in her words, “all the dance companies in the world.” Yet she had never seen anything like Shen Yun.

The New York-based classical Chinese dance and music company Shen Yun Performing Arts has several touring companies that travel the world each year. Sullivan was gifted tickets to see Shen Yun at the San Jose Center for the Performing Arts on Jan. 12, 2020.

“I’m very excited to be here today and watch the beautiful classical technique I saw in these dancers … very, very unique,” she said. “I thought the dancers were just phenomenal. They took my breath away.”

As a ballet teacher, Sullivan knows good technique when she sees it.

“I expected it to be like classical ballet, and it was so much more than that, and I was pleasantly surprised,” she said. “Their extensions are behind their heads, and they fly through the air, even the men, and they just hang in the air, and it’s breathtaking. It’s just beautiful; it’s fantastic. As a teacher, I can see the technique. I can see that all the feet are beautifully pointed. … I love the way the costuming is, the pants that they have on, because then you can see the legs, but yet it’s very modest. I just loved it. I just loved the whole thing. It was great.”

Shen Yun’s mission is to revive traditional Chinese culture, which has nearly been lost in modern times. The company’s website explains that classical Chinese dance dates back thousands of years and was enriched throughout the different dynasties, but today only Shen Yun preserves it in its purest form.

She admired the skill behind the choreography.

“The director, he’s a genius,” she said. “I was trying to watch the choreographic patterns that he came up with, and that is something that I would love to be able to emulate. … It was very complex choreography, and I noticed a lot of the times, the lead dancer was in the same costume [as the other dancers]; I liked that. … Having the lead dancer be one of everybody, it communicated that people are all the same inside and that we all have that opportunity to express ourselves, and you never know at what moment you’re going to get a chance to step out, and to be ready any time.”

“Between the dancing itself and the costuming and the screen with the scenery changing, it was really very inspiring,” Sullivan said. “The level that [Shen Yun has] gotten this performance to is just absolutely superb, because [they] utilize ancient technique and ancient dance, but [they] have modern scenery.”

She said the Shen Yun backdrop gave her inspiration for one of her own upcoming productions. She feels that Shen Yun brings together and amalgamates “our new technology with the old ancient and precious beauty and simplicity of the dance.”

“It just makes it absolutely magnificent,” she said.

Sullivan has been a dance teacher since 1980 and runs the nonprofit Centerstage Performing Arts Foundation in Sonora, California. She was married to a minister, and they used performing arts in their ministry around the country.

“I feel a divine presence on [Shen Yun]. I really do,” she said. “I feel God’s presence. … I felt that they were aware of the Creator and the Creation and … to understand that there’s a Creator, and those are all things that I believe very deeply.”

Faith in the divine was an important part of ancient Chinese culture. Under today’s Chinese communist regime, which is officially atheist, traditional beliefs have been violently suppressed for the past several decades. Shen Yun artists, on the other hand, still strive to follow traditional moral values and aesthetics as well as the ancient Chinese tradition of spiritual self-improvement.

The performers “believe that cultivating the heart is the way to create art that is beautifully sublime,” Shen Yun’s website states.

“I just think that the culture is so important,” Sullivan said. “To see it this way, it’s presented with faith, with beauty, with simplicity, and yet absolutely perfect technique. I mean, just magnificent. It was great.”

Sullivan admired the courage and kindness she saw in the performance.

To her, the performance had a message about the Creator and about faith and integrity.

“You don’t always get to see a performance at this level that has that message,” she said. “This level is professional and above. … I think that if you can keep bringing in audiences, in our world that has become very estranged and in so many ways ugly and filled with hatred and filled with sadness and poverty, this message is one that is positive and uplifting and one that brings us back to our roots and our beliefs, and what could be better than that?”

In addition to the dance pieces, Shen Yun includes vocal solos sung in the traditional bel canto technique. Sullivan felt inspired by these songs, which are written especially for Shen Yun’s performances.

“It was a message of faith, and it made me very happy,” Sullivan said.

She was very glad to have had the opportunity to see Shen Yun.

“It was just very profound, and I’m going to have to think about this for a while because I’m moved in my spirit,” she said.

With reporting by NTD Television and Sally Appert.