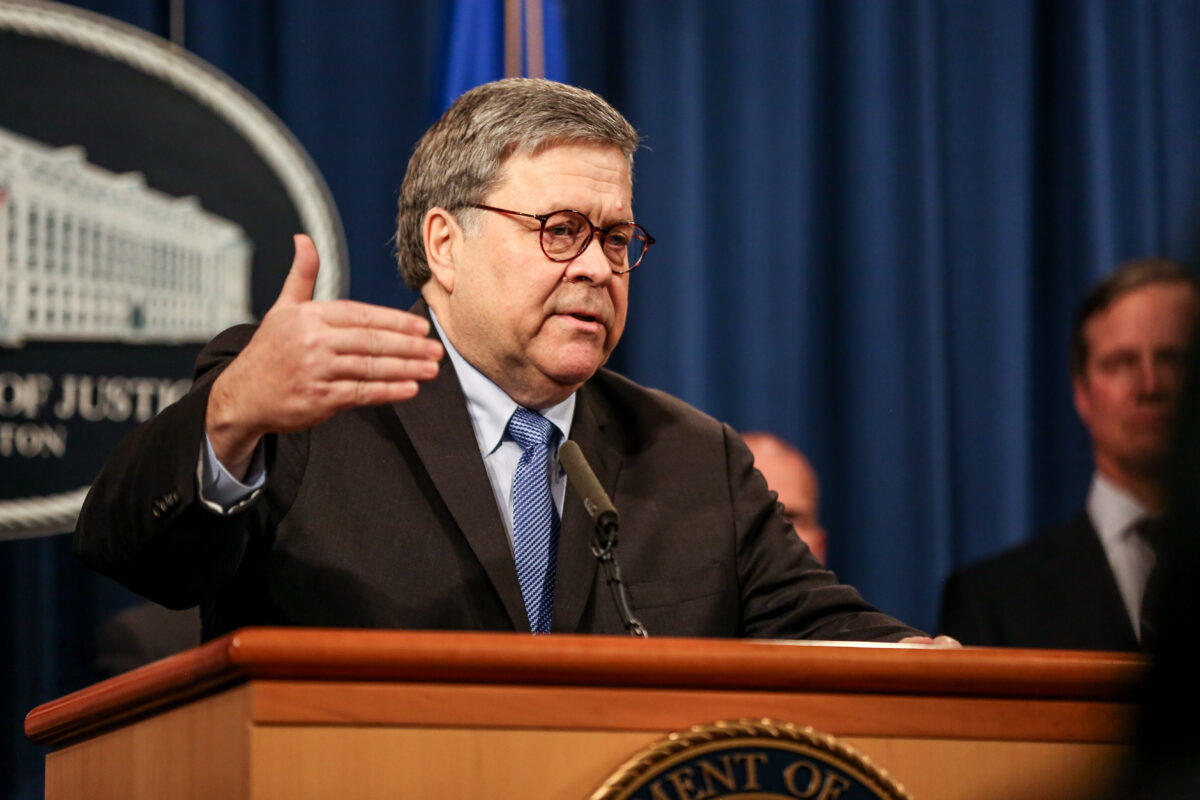 Attorney General William Barr recently raised questions about whether major technology companies should remain largely immune from litigation regarding its user-generated content, adding that the technological landscape has changed much in recent decades.

Barr stated his concerns during a Feb. 19 Justice Department workshop on Section 230 of the Communications Decency Act. The act, which was passed in 1996, states that “no provider or user of an interactive computer service shall be treated as the publisher or speaker of any information provided by another information content provider.”

Online companies such as Facebook, Google, and Twitter are protected by Section 230 as it largely exempts them from liability involving content posted by users of their platforms, although they can be held liable for content that violates criminal or intellectual property law.

“No longer are tech companies the underdog upstarts; they have become titans of U.S. industry,” Barr said. “Given this changing technological landscape, valid questions have been raised on whether Section 230’s broad immunity is still necessary, at least in its current form.”

Some of Barr’s concerns relate to the apparent stretching of the statute’s original purpose. He said the statute’s immunity has since been extended to conduct such as “selling illegal or faulty products to connecting terrorists to facilitating child exploitation.”

New York attorney Barry Barnett, an antitrust law expert, told The Epoch Times that Barr’s remarks about the scope of the statute indicate the administration’s willingness “to use a broad array of legal tools to address harms it attributes to big tech platforms.”

The Justice Department is “concerned about the expansive reach of Section 230” Barr said, but it won’t advocate for a specific position on the matter.

In December 2019, the 9th Circuit held that the statute doesn’t protect a firm from antitrust liability if its decisions about “blocking and filtering” content “are driven by anticompetitive animus,” according to Barnett. He said in the future, he expects the Justice Department’s Antitrust Division to support rulings similar to the one made by the 9th Circuit, in light of Barr’s comments.

Ashley N. Baker, director of Public Policy at the Committee for Justice, meanwhile warned that any proposed government solutions to the issues with Section 230 “are worse than the problem.”

“Calling for top-down intervention by the government into social media content would give bureaucrats immense control over online speech,” Baker said via email. “While I understand that there is legitimate concern over how broadly the statute is applied in court, I think that we need to carefully think this through, particularly from the perspectives of government power, platform incentives, and lawsuit abuse.”

Baker, whose focus areas include the Supreme Court, technology, and regulatory policy, said that without the statute, “platforms would have strong incentives to heavily moderate content.”

Barr’s comments offered insight into how regulators in Washington are reconsidering the need for incentives that once helped online companies grow but are increasingly viewed as impediments to curbing online crime, harassment, and extremism.

The interest in Section 230 came as part of a “broader review of market-leading online platforms,” according to Barr. In July 2019, the department announced that its antitrust division is “reviewing whether and how market-leading online platforms have achieved market power and are engaging in practices that have reduced competition, stifled innovation, or otherwise harmed consumers.”

“Big tech” is facing an unprecedented number of antitrust investigations, with four major multinational technology companies—Facebook, Google, Amazon, and Apple—receiving a level of scrutiny not seen in decades. A congressional committee and subcommittee are investigating all four, even as the Justice Department and the Federal Trade Commission are reviewing one or more of the companies.

Lawmakers from both major political parties have called for Congress to change Section 230 in ways that could expose tech companies to more lawsuits or significantly increase their costs.