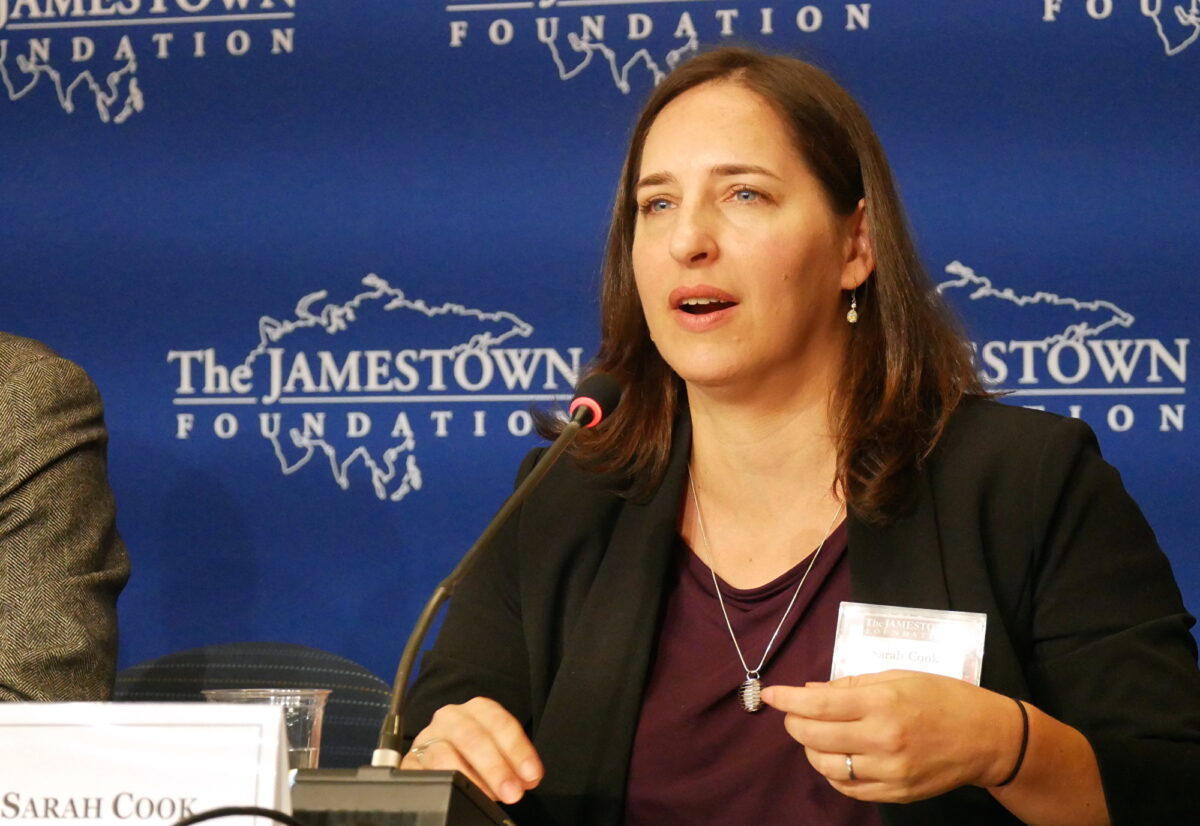 Yan Yuhua is one among the millions who have languished in Chinese prisons because of their faith. The first time she was arrested, in 2006, guards put her in solitary confinement in an effort to force her to sign a renouncement of her faith. Sleeping, showering, eating, and even lying down were luxuries. They poured cold water over her body and forced her to stand for prolonged periods. They also barred her family—parents in their 70s and a teenage son—from visiting her.

Later, she was detained at a brainwashing center for 2 1/2 years. Guards made her wear earbuds blasting propaganda that attacked her faith. “Watchers” would take turns beating and insulting her.

Stories mirroring the experiences of Yan, an adherent of the spiritual practice Falun Gong—whose practitioners have been persecuted by the Chinese regime since 1999—are now also occurring in China’s northwestern region of Xinjiang.

Origins of the Xinjiang Model

Xinjiang is home to roughly 11 million Uyghurs and members of other Muslim minorities.

Under the guise of  “eradicating extremism,” Chinese authorities began a campaign in 2014 to monitor, suppress, and persecute Muslim minorities, including by establishing an overarching surveillance network. The regime collected biodata from residents and installed cameras and phone apps to monitor their activities.

Estimates by the United Nations found that more than a million Muslim residents are currently detained in internment camps, where they are tortured, “re-educated,” and forced to swear allegiance to the Chinese Communist Party (CCP), in an effort to coerce them into giving up their faith.

According to experts, the tactics used in the current repression were not devised recently, but are the culmination of the regime’s two decades of experience in targeting Falun Gong.

The spiritual discipline, which incorporates meditative exercises and moral teachings based on the principles of truthfulness, compassion, and tolerance, drew roughly 70 million to 100 million adherents before the CCP launched a nationwide campaign to eradicate the practice in 1999.

The concept of “transformation through education,” for example, emerged with the persecution of Falun Gong, according to Sarah Cook, a senior China analyst at the watchdog organization Freedom House, in a February 2019 report.

The Chinese regime detains Falun Gong practitioners in prisons and “legal education centers” (often dubbed brainwashing centers), and previously sent them en masse to labor camps, which were abolished in 2013. In the prisons and centers, detainees are forced to watch propaganda videos, sing pro-CCP songs, and “repent” for their supposed crimes of faith. Those who resist the pressure are subject to torture.

The euphemism “transformation” is a way for the Chinese regime to “invoke a positive image” and frame the process as “compassionate treatment,” Cook said.

“It’s such a Falun Gong-oriented term that really emerged and took off. … Then you see this exact same term coming up in Xinjiang,” Cook said in an interview with The Epoch Times.

She recalled a 2018 panel about Xinjiang, held at the Hudson Institute in Washington, where she was surprised to hear a China analyst associating the term “transformation” with Xinjiang. “These scholars … are not that familiar with the specific Party language related to Falun Gong, and that was really striking when I heard them say that.”

According to an incomplete survey from Minghui.org, a clearinghouse documenting the persecution of Falun Gong, there are 449 brainwashing centers in 173 cities and 329 districts or counties across China.

Such facilities proliferated after the Chinese regime abolished the labor camp system in 2013, Cook noted. The persecution of Falun Gong continues unabated.

A most telling link between the two persecution campaigns, according to Cook, is the fact that key officials who are now influencing Xinjiang policy originally built their careers through their campaigns against Falun Gong.

Fu Zhenghua is currently China’s minister of justice in charge of funding Xinjiang’s political indoctrination programs. From 2015 to 2016, he led the 610 Office, an extralegal agency created expressly to oversee the Falun Gong persecution.

He also held a top post at the Beijing municipal police bureau between 2010 and 2015, during which time Falun Gong practitioners who refused to renounce their faith were “reported to have been directly sent to various ‘brainwashing centers’” following the official dissolution of the labor camp system, according to a 2013 Amnesty International report (pdf).

Sun Jinlong, Party secretary of the Xinjiang Production and Construction Corps, a state-owned quasi-military and business conglomerate, also has extended experience with the persecution. In a 2001 national conference, Sun made a public speech denouncing Falun Gong and encouraged officials to “tirelessly struggle against” the spiritual practice, according to the Party’s mouthpiece newspaper People’s Daily.

In 2010, while Sun was Party secretary of Hefei city, Anhui Province, he outlined an “overall battle work plan” to monitor and harass local Falun Gong practitioners, including setting up databases of practitioners and brainwashing centers for “stubborn” adherents, and conducting door-to-door visits. The plan announced a goal to “transform” all “newly identified” adherents within a year. Street-level officials would receive honorary titles recognizing their effectiveness in those efforts, local government records showed.

Their “proven track record of harshly suppressing innocent religious believers” seemed to be “precisely” what got them to higher ranks, Cook said.

The World Organization to Investigate the Persecution of Falun Gong, a U.S.-based nonprofit dedicated to documenting the persecution of the spiritual discipline, has named both officials as human rights violators.

The Xinjiang policy bears other hallmarks of the campaign against Falun Gong.

In terms of terminology, officials executing the suppression in Xinjiang and of Falun Gong have framed reeducation efforts as “psychological counseling” and have assigned target quotas for security officers, Cook said.

Authorities also use similar terms to refer to the two groups: “die-hard” Falun Gong practitioners and “strike hard” detainees in Xinjiang, for example.

Minghui.org has reported extensively on how police have eavesdropped on Falun Gong practitioners’ phones since the early 2000s to collect intelligence on them. A quick search on the website reveals a dozen cases of prolonged phone tapping, most of which were followed by subsequent arrests. The 20 years of experience in suppressing Falun Gong allowed the Chinese regime to quickly pull together an apparatus to persecute Muslim minorities in Xinjiang.

“It’s like any kind of project management. Once you’ve done it before, it goes that much faster the second time,” Cook said. “They know exactly what they’re doing.”

She said the recurring patterns showing Chinese officials “following the anti-Falun Gong playbook in Xinjiang” is cause for alarm.

“It indicates that they are playing the long game, have little intention of reversing the policy, and have few qualms about using harsh tactics like severe torture or long prison terms to achieve their aims,” Cook wrote in her February report.