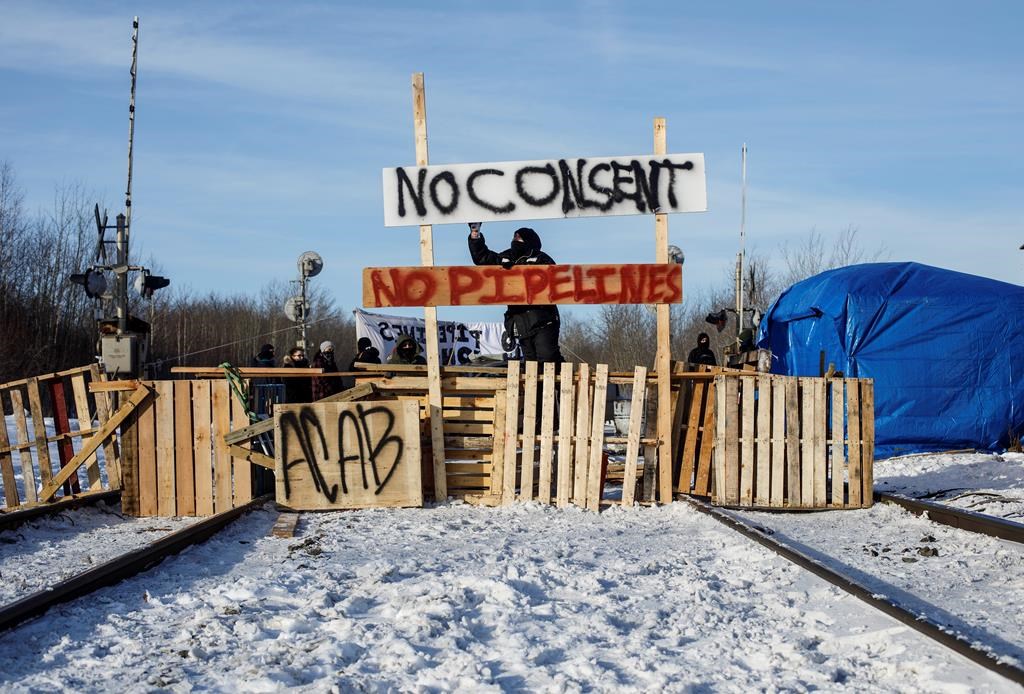 EDMONTON—A blockade has been set up on a Canadian National rail line on the western edge of Edmonton in support of Wet’suwet’en hereditary chiefs who oppose a natural gas pipeline in British Columbia.

A group called Cuzzins for Wet’suwet’en says in a news release that it’s staging the protest in solidarity with the chiefs. It says the protesters “intend to maintain the blockade until Prime Minister Justin Trudeau intervenes and the RCMP leaves Wet’suwet’en territory.”

The group has posted photos on Twitter showing a blockade of wooden crates on the train line and signs that say “No Consent” and “No Pipelines on Stolen Land.”

A statement from CN says CN police and local police are responding to the blockade.

“Train movements are currently stopped,” said the statement on Feb. 19. “We will be taking the necessary legal actions under the circumstances.”

Edmonton police said they have been advised of the blockade, but are not directly involved at this time.

Alberta Justice Minister Doug Schweitzer said on Twitter that blocking economically critical infrastructure such as rail lines is an offence and will not be tolerated.

“It is my understanding that CN rail is seeking an emergency injunction … which the government of Alberta fully supports,” he wrote.

A court hearing is expected in Edmonton this afternoon.

Premier Jason Kenney, who has been critical of the blockades, said he expects police to respect and enforce court orders.

He planned to be on a conference call this afternoon with all of Canada’s premiers about blockades across the country.

“These illegal blockades—there’s people losing their jobs, blue-collar people, vulnerable people,” he said while in Calgary.

“What is happening here is anarchy.”

The blockade is in support of Wet’suwet’en hereditary chiefs who oppose a natural gas pipeline through their traditional territory in northern British Columbia—although the line has received approval from elected band councils.

Since the RCMP moved in to enforce an injunction and keep the hereditary chiefs and their supporters away from pipeline worksites, protests by Indigenous people and supporters have shut down the CN rail network in central Canada, suspended most Via Rail passenger service, and temporarily blocked traffic on streets and bridges and at ports in multiple cities.

The Confederacy of Treaty Six First Nations, which represents 16 First Nations across Alberta, said in a statement that it supports the hereditary chiefs.

“We call upon law enforcement officials to ensure safety of peaceful land protectors and the railway workers,” said Grand Chief William Morin. “We call upon the RCMP to honour the request of the Wet’suwet’en people by immediately removing the RCMP’s mobile command unit from Wet’suwet’en territory.

“Following this, we call upon Prime Minister Trudeau and (B.C.) Premier (John) Horgan to immediately meet with the Wet’suwet’en people to resolve this in a peaceful manner for all Indigenous Peoples and Canadians.”

In Ottawa, Trudeau said his government is trying to find a resolution, but also acknowledged the economic impact that the rail blockades are having across the country.

“We know that people are facing shortages. They’re facing disruptions. They’re facing layoffs. That’s unacceptable,” he said. “That’s why we’re going to continue working extremely hard with everyone involved to resolve the situation as quickly as possible.”