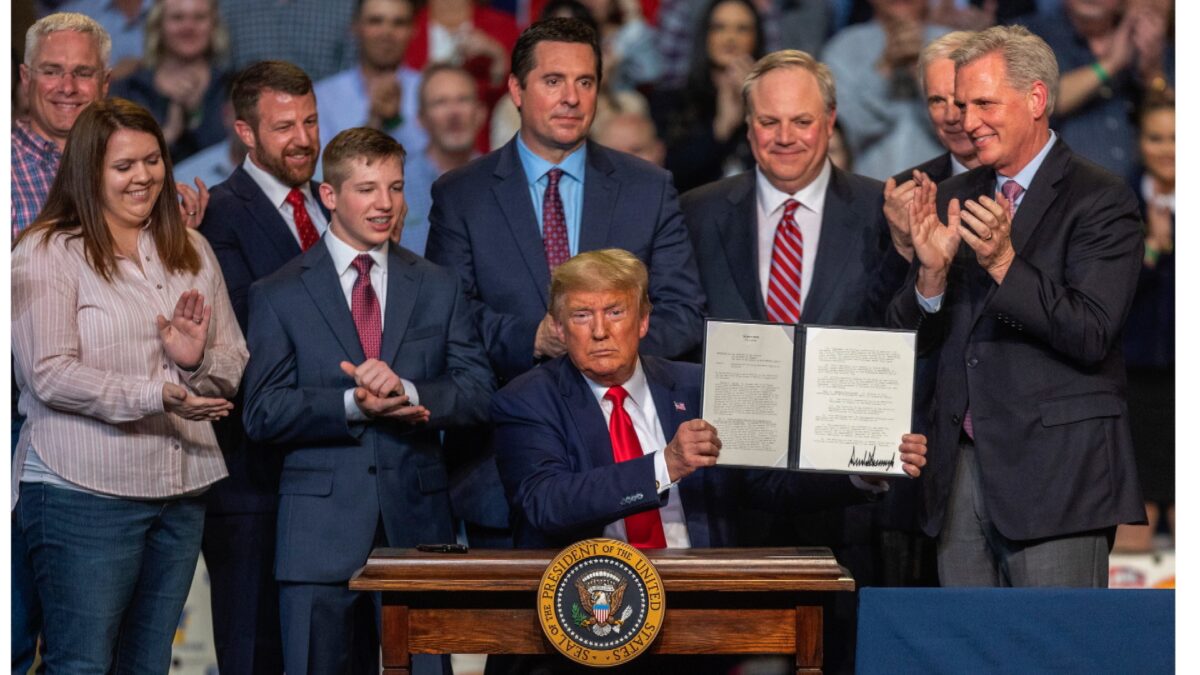 The state of California has filed a lawsuit against the Trump administration alleging that President Donald Trump’s order granting farmers more access to water in the state had failed to consider a variety of environmental impacts.

The president signed a memorandum on Wednesday supporting water development and delivery in the state’s Central Valley and Southern California, fulfilling a campaign promise. The order would allow farmers to pump water to irrigate farmland, addressing a water crisis that has impacted the state’s agricultural industry. For years, farmers have been lobbying for changes in rules that govern the management of the federal Central Valley Project (CVP) and the State Water Project (SWP), the two largest water and transport systems in the state that provide water to over 25 million Californians and acres of farmland. The rules limit water supplies to the farmers who have been fighting years of drought, in an effort to protect aquatic life.

The president’s move has angered many environmentalists and fishing groups who say the new operational plans would imperil threatened fish species such as smelt and salmon in the Sacramento and San Joaquin River watersheds. The Trump administration says the changes, which are based on newer biological opinions, will ensure that the environment and aquatic life remains protected while directing as much waster as possible to the farmers and communities suffering from the lack of water. The new plans would include habitat restoration, facility improvements, hatchery actions, monitoring, and science commitments estimated to cost $1.5 billion in Federal and state funding over 10 years.

“Our team of career professionals did a great job using the best available science to develop new operational plans for the coordinated operations of the Central Valley Project and State Water Project,” Secretary of the Interior David Bernhardt said in a statement.

In 2018, the president directed the Department of the Interior and the Department of Commerce to complete a new operation plan to address the “inefficiencies, burdens, and conflicts in water delivery” in California. The U.S. Fish and Wildlife Service issued a biological opinion in October the planned operations “will not jeopardize threatened or endangered species or adversely modify their designated critical habitat.” Similarly, the National Marine Fisheries Service issued a separate biological opinion on the same day, which also found that the operations “is not likely to jeopardize the continued existence of Sacramento River winter-run Chinook salmon, CV spring-run Chinook salmon, CCV steelhead, Southern Resident Killer Whales, or the Southern DPS of Green Sturgeon or destroy or adversely modify their designated critical habit.” The Bureau of Reclamation (BOR) formally adopted the 2019 Biological Opinions on Feb. 19.

Trump said on Wednesday that the new plans would “update the outdated scientific research and biological opinions” that determined how much water is available for farmers and residents in the state.

“We’ve done the full complete update on water and water allocation. A major obstacle to providing more water for the region’s farmers has now been totally eliminated by the federal government,” he said.

About a day after Trump signed the memorandum, California Attorney General Xavier Becerra and two state agencies sued the Trump administration claiming that the 2019 biological opinions “lack safeguards for protected species and their habitat.” The suit also challenges BOR’s decision to adopt the opinions.

“California won’t silently spectate as the Trump Administration adopts scientifically-challenged biological opinions that push species to extinction and harm our natural resources and waterways,” said Becerra, who has brought multiple legal challenges against a range of the president’s policies.

The lawsuit (pdf) lists out reasons why the biological opinions and BOR’s decision had violated legal requirements, including failing to provide analysis on whether the plans would push a species toward extinction, and whether it puts many fish species at risk.

“Our goal continues to be to realize enforceable voluntary agreements that provide the best immediate protection for species, reliable and safe drinking water, and dependable water sources for our farmers for economic prosperity. This is the best path forward to sustain our communities, our environment and our economy,” California’s Governor Gavin Newsom said in a statement.

Bernhardt commented on the California official’s move to sue the administration saying that they had “launched a ship into a sea of unpredictable administrative and legal challenges regarding the most complex water operations in the country, something they have not chartered before.”

“Litigation can lead to unpredictable twists and turns that can create significant challenges for the people of California who depend on the sound operation of these two important water projects,” he added.