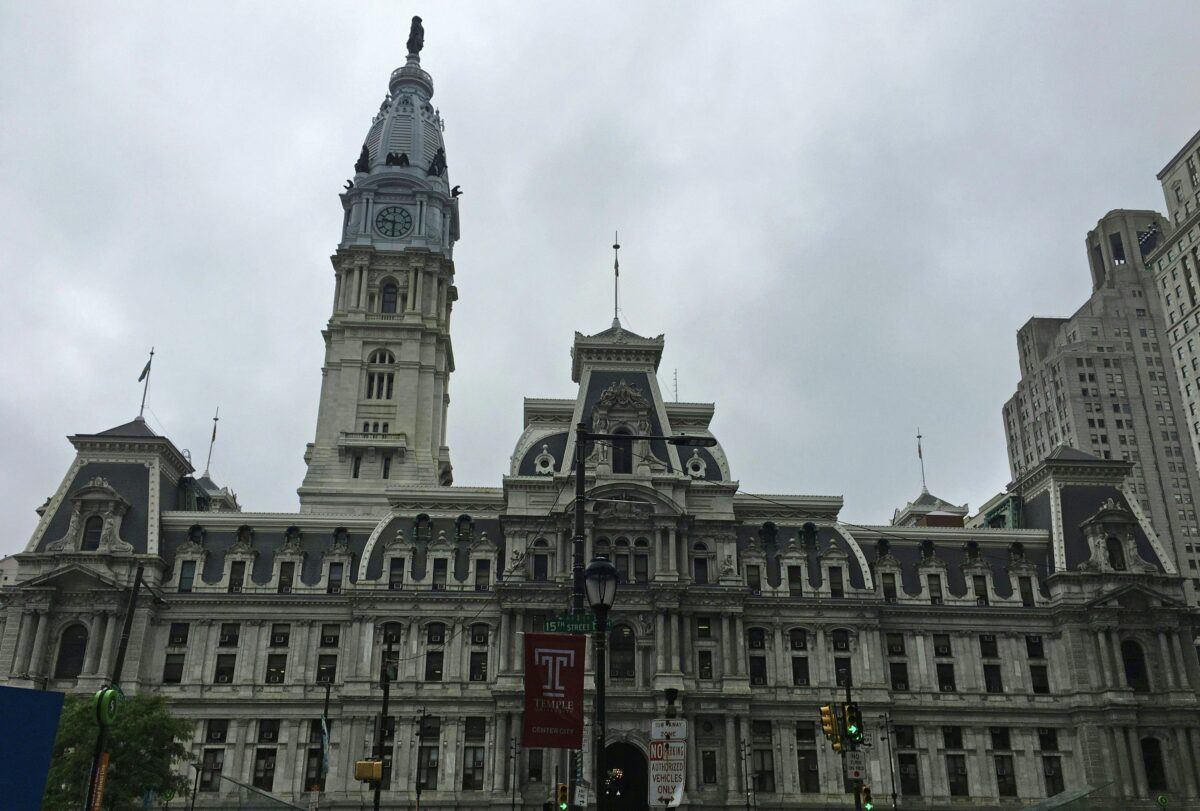 Beijing has lavished praise on the city of Philadelphia after it raised the flag of the People’s Republic of China (PRC) in ceremonies held on and around the communist regime’s Oct. 1 National Day.

China News Net, a state-controlled outlet, published an article calling Philadelphia a “red Yan’an,” alluding to the city where the Chinese Communist Party was headquartered prior to seizing power over the whole country in 1949. The article was reposted by the PRC State Council’s Overseas Chinese Affairs Office.

On Oct. 1, Philadelphia City Hall raised the PRC flag to “celebrate pride in the local Chinese-American community,” according to a statement from the mayor’s office.

The ceremony was preceded by two similar events at Independence Mall on Sept. 28, and on Sept. 22 in Philadelphia’s Chinatown. All three events featured the “red songs” of the CCP, including well-known titles like “Singing a Folk Song for the Communist Party” and “My Homeland China and I.”

Philadelphia is the city where the U.S. Declaration of Independence and the American Constitution were drafted.

Municipal officials and two city council members gave remarks at the flag-raising before the city hall. Li Shipeng, deputy consul-general of the Chinese consulate in New York, also attended and delivered a speech.

Despite being billed as a celebration of the local Chinese community, the flag-raising ceremonies sparked controversy for their implicit support of the CCP regime.

The three events were organized by Bihong Guan, a naturalized U.S. citizen of Chinese descent who has lived in Philadelphia since 1988. Since 1998, he has organized ceremonies to raise the PRC flag on Oct. 1 each year, ostensibly in support of diversity.

And while the mayor’s statement said that “the flag raisings are not a sign of support for any specific government, political party, or movement,” the ceremonies hold profound significance for the Chinese regime.

The PRC state flag embodies the communist takeover and dictatorship. “The red color represents the revolution,” according to a government site. “The five stars and the interaction between them stands for the revolutionary people unified under the leadership of the Communist Party.”

According to Chinese law promulgated in 1990, raising the PRC flag is an important tool for instilling patriotism and collective values. In China, it is illegal to raise any foreign flags without explicit permission, and the flags must be flown with the PRC flag.

In August 2018, the world-famous Shaolin Temple raised the PRC flag, a move many observes saw as an effort to stave off persecution by demonstrating loyalty to the CCP.

Historians estimate that in the 70 years since it came to power, the Communist Party has caused the unnatural deaths of at least 60 million Chinese through famine, terror campaigns, and other forms of political persecution.

“Raising the flag of a brutal totalitarian regime does not honor the immigrants whose parents and grandparents were brutalized by the government it represents,” Christine Flowers, a Philadelphia television host, wrote in an Oct. 4 commentary.

“Raising that flag does not honor the humanity of those Chinese refugees, prisoners of conscience, and victims of persecution who I have met in my capacity as an asylum advocate. Raising that flag is an abomination.”

Doing the Party’s Work in America

Bihong Guan, the Chinese-American who organized the Philadelphia flag-raising ceremonies, has received official recognition from CCP leaders. For at least two of the National Day celebrations in recent years, Guan was honored with invitations to attend the military parades in Beijing from a viewing spot atop the gates of Tiananmen.

In addition, Guan has met with former Party heads Jiang Zemin and Hu Jintao, as well as former Chinese premier Wen Jiabao, in congratulations for his work in Philadelphia. Wa

Members of a pro-Chinese regime group from New York came to Philadelphia to take part in the ceremonies, where they engaged in political harassment.

After the flag-raising at Independence Mall on Sept. 28, more than 20 Chinese left the venue and headed to Liberty Bell Park. Several practitioners of Falun Gong, a Chinese spiritual discipline that is persecuted by the CCP, were gathered in the park for weekly meditation practice.

Led by a woman named Li Huahong, the pro-regime Chinese began to yell insults at the meditators, most of whom were also ethnically Chinese.

Li is known for her role in organizing anti-Falun Gong events in the New York area. She had previously been sentenced in 2013 for assaulting a Falun Gong practitioner in Flushing, Queens.

According to Yang Jingfang, a Philadelphia local who was meditating with the other practitioners on Sept. 28, they called 911 out of fear for their safety.

“The police arrived quickly and moved Li’s group to the other side of the road,” Yang told The Epoch Times. “But they kept on shouting profanities at us for a while.”

Falun Gong, also known as Falun Dafa, is a discipline based in traditional Chinese faith and the values of truthfulness, compassion, and forbearance. Before the CCP launched its persecution in 1999, the Chinese authorities estimated that 70 million people had taken up the practice.