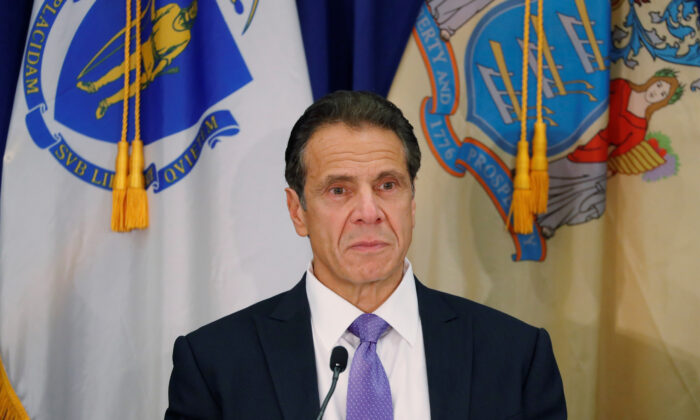 Democratic New York Gov. Andrew Cuomo said he would give the federal government access to the entirety of the state’s Department of Motor Vehicles (DMV) database, except for Social Security numbers.

“I would give them anything but the Social Security numbers,” the governor said during an interview with the WAMC radio station on Friday.

The new offer comes after an apparent stalemate in negotiations between New York state and the Trump administration, which banned New Yorkers from trusted traveler programs earlier this month because state officials stopped sharing information from the DMV with immigration enforcement agencies.

“We no longer have access to make sure that they meet those program requirements, so we need to do our job,” acting Department of Homeland Security (DHS) Secretary Chad Wolf said during an appearance on Fox News, saying that’s why New York residents can’t join or stay in the programs.

The decision to block access to the DMV database was part of a recent law that New York passed. Another part of the law lets illegal immigrants apply for driver’s licenses.

Cuomo’s previous offer, according to his public comments, was to let the federal government access the DMV database “on a case by case basis” and only for people who enroll in trusted traveler programs (TTP).

“You want to look at our DMV database for TTP enrollees, fine, because a TTP enrollee is going to sit with the federal government anyway to do an interview,” he said on the radio last week.

Wolf said the meeting was “productive” but that no agreement was reached while Cuomo said that he “restated my initial solution: NY is willing to provide DMV records for NYers applying to TTP.”

“He’s open to working with us on this and we’ll continue the conversation in the coming week,” Cuomo stated.

Cuomo and other state officials have claimed the administration’s move was a form of political retribution for the policies they’ve enacted. But some state and local officials are also pushing for a reversal of the ban on federal agents accessing the state database, with the assertation that it was up to state lawmakers to fix what happened.

“As bad as this law is, it passed both houses and he signed it into law,” Steve McLaughlin, county executive for New York’s Rensselaer County, told reporters at a press conference in Troy on Thursday.

“Unless the governor can do this through the executive order—which I highly doubt—this would have to go all the way back through the legislature, which is why I called on the legislature to get involved here rapidly and make the amendments to this bill.”

Cuomo said on the radio on Friday that state law says “we can’t give them the DMV database,” but indicated he can give them other information, such as “criminal information” and “the global entry information.”

In a statement after Cuomo’s interview, Heather Swift, a DHS spokeswoman, said that last week’s meeting “was positive and productive.”

“Since then, DHS and NYS officials have been working closely to come to a mutually-agreeable solution. At this time we have nothing to announce but look forward to a positive outcome,” she said.