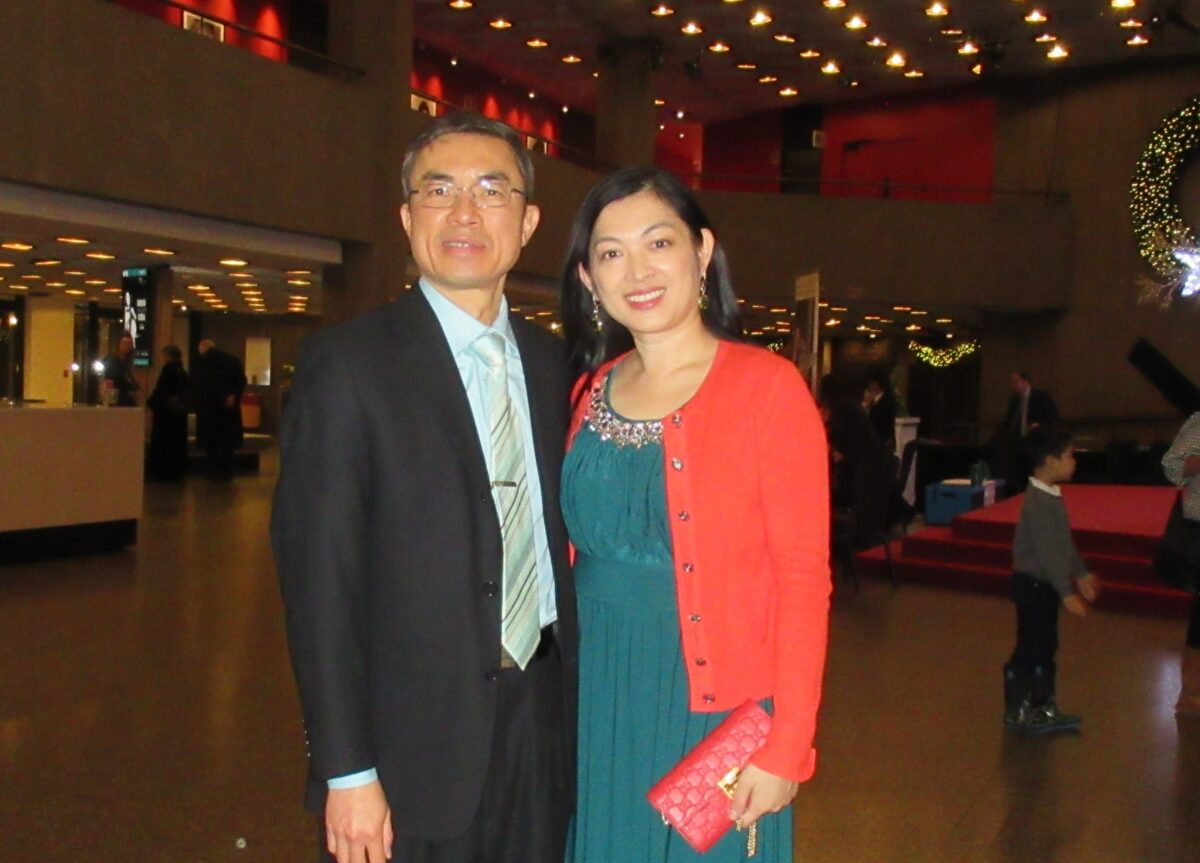 OTTAWA—Some artistic experiences are so beautiful and profound that you find yourself returning to them again and again.

That’s been the case for family doctor Hong Phuc Tran-Le and his wife Thuy Duong, a pharmacist, who attended Shen Yun Performing Arts at Ottawa’s National Arts Centre on Dec. 27, 2019. It was their fourth time seeing New York-based Shen Yun, which presents an all-new performance each year. Tran-Le said that Shen Yun’s revival of true Chinese culture and identity is what impressed him most this year.

“It’s not only a show, but it reminds us of our roots. In this kind of world, it’s very important to know who we are, and the identity of where we come from. Because if we don’t have this identity, we don’t have our own roots or our culture, we will be lost in that sea of multiculturalism, diversity,” Tran-Le said.

Tran-Le was deeply inspired by the true Chinese culture he saw in Shen Yun.

“When I come to see [Shen Yun], it reminds me of—well I’m not Chinese, I’m Vietnamese—but we have the same heritage. We are Asian, and share a lot of the same culture. It makes me proud to see that very rich culture, 5,000 years, and the beauty, and the vision. That gives me more confidence, and also makes me proud to be an Asian … This world is just like when we go to the open sea, but when we have our culture, we won’t be lost. That is very important,” he said.

Tran-Le picked up on the subtle manifestations of ancient China’s deeply principled culture in the details of the performance.

“Very graceful. The ladies, in the Manchurian performance are so smooth [in their movements], and the beauty inside, that kind of substance is a strength. That impressed me in the Chinese culture, the Asian culture. We have a way of doing [things]—we are soft outside but very strong inside. When we use grace, we don’t need to use violence or force to convince people. We can use grace, can use the inner strength and also the beauty, the sense of beauty. It will convince more people than the use of force. I see this in this kind of performance.”

“It’s the beautiful dances, the performance, and the orchestra, the music. Also, the stories behind all these dances, it’s beautiful Chinese culture. Actually, I’m a Buddhist … and I practice meditation. So I quite understand the messages from these dances.”

Traditional Chinese culture has always acknowledged the presence of a divine Creator. Shen Yun depicts this ancient belief on stage.

“The impression [from these dances] makes me feel uplifted,” Tran-Le said. “The one scene that impressed me the most is when the soprano said that ‘falsehood comes from atheism and evolution.’ It’s very important to remind us that we are not from animals, but we are from heaven. We are made in the image of God. That’s where we are from, and the destiny of human beings. Because in this world, when people believe more in atheism, people are lost and become oriented in the culture of death. It is important that this kind of show reminds people that we are from God and we will return to God. That gives a sense of life to us, and gives us more energy and more motivation to live on and to overcome all the difficulties. And if we see all kinds of immorality or all kinds of conflict, all kinds of lies in this world, we won’t lose hope because we know where we come from.”

The final dance of the evening is titled “Renewal of Heaven and Earth” and depicts a grand drama of a persecuted people, their faith in the divine, and the compassion they exhibit. This story is unfolding in real life in China today between followers of Falun Dafa, an ancient Chinese meditation practice, and the Chinese Communist Party who are attempting to stop their practice.

Tran-Le said this dance filled him with hope.

“Yes, hope. Because we have come to an era where we have the extremes of evil and the extremes of good. More and more, the difference is clearer and clearer. I believe that sooner or later, there will be a huge clash between the two set of values, and a judgement day will come. When we go to the farthest limit, we will have that kind of clash, we call that the hour of truth and the judgement day,” Tran-Le said.

“And now, at least people can make a clear choice, because we will see evil and good, and the consequences of these two values, and the two paths,” he said.

“It’s a message about meditation practice. It brings us upliftment, and if we believe in God or the Buddha, we can get the contact, and the light will shine on us, and help us to get rid of all the bad karma, and the natural disasters that are happening around the world today,” Duong said.

“In Buddhism, the Buddha’s teaching is focused on the inner beauty that we have to seek to develop what we call ‘Buddha nature.’ That’s the ultimate goal from this Shen Yun performance, aside from all the artistic performances and the music quality,” she added.

The doctor had a parting message for the artists of Shen Yun.

“Continue your great work. You have a mission to bring back the culture and to remind us of who we are, the identity of Asian people. That is a very important thing, and it reminds us that we are from God, and will return to god. God bless all of you, God bless Shen Yun.”

Shen Yun is comprised of seven touring companies that perform in the world’s top theaters for over 1 million audience members each year.

“Actually, the first year we came to see Shen Yun, I loved it and also wished that it spread more. Seven companies [now], unbelievable!” Duong said.