The Federal Reserve has released the minutes of its December interest-rate setting meeting, showing meeting participants are concerned about low inflation but confident enough in the economy to hold rates steady going forward.

At a December meeting of the Fed’s policymaking body—the Federal Open Market Committee (FOMC)—officials voted to keep their benchmark interest rate in a range between 1.5 percent and 1.75 percent.

The minutes—and insight into how central bank officials are weighing policy moves in support of higher or lower interest rates—were released Friday (pdf).

They show Committee members highlighting risks to the economic outlook from global economic softness and below-target inflation in America.

“Global developments, related to both persistent uncertainty regarding international trade and weakness in economic growth abroad, continued to pose some risks to the outlook, and inflation pressures remained muted,” the Committee said.

Remarks in the document echo those of Fed Chairman Jerome Powell, who warned reporters that inflation running too cool for too long could sap sentiment and nudge the economy into a downturn.

“While low and stable inflation is certainly a good thing, inflation that runs persistently below our objective can lead to an unhealthy dynamic in which longer-term inflation expectations drift down, pulling actual inflation even lower,” Powell said after December’s FOMC (pdf).

He complained that “inflation continues to run below our symmetric 2 percent objective.”

Over the 12 months through October, a measure of core inflation—which does not include food and energy prices due to their volatility—was 1.6 percent in the United States.

“This outlook reflected, at least in part, the support provided by the current stance of monetary policy,” the Committee noted, adding that “almost all participants expected that, under appropriate monetary policy, growth of real GDP in 2020 would run at or slightly above 1.9 percent.”

Real GDP in the United States rose 2.1 percent in the third quarter of 2019, according to the Bureau of Economic Analysis.

The Committee said it would continue to monitor the economic outlook, including labor market conditions, inflation expectations, and readings on financial and international developments.

“With our decisions through the course of the past year, we believe that monetary policy is well-positioned to serve the American people by supporting continued economic growth, a strong job market, and inflation near our symmetric 2 percent goal,” Powell said.

The central banker signaled the Fed’s readiness for decisive steps in case of future softening.

The Fed and Mortgage Rates

The Fed has a dual mandate to foster price stability and maximum employment, which it aims to achieve through three tools of monetary policy: open market operations, the discount rate, and reserve requirements.

Using the three tools, the Fed influences the federal funds rate, which is the interest rate at which banks and other depository institutions lend balances they keep at the Fed to other banks and institutions overnight.

“Changes in the federal funds rate trigger a chain of events that affect other short-term interest rates, foreign exchange rates, long-term interest rates, the amount of money and credit, and, ultimately, a range of economic variables, including employment, output, and prices of goods and services,” the Fed explains.

It is a misconception that the Fed sets or directly affects mortgage rates. The federal funds rate has only an indirect impact on the cost of home loans, which is moderated by markets. 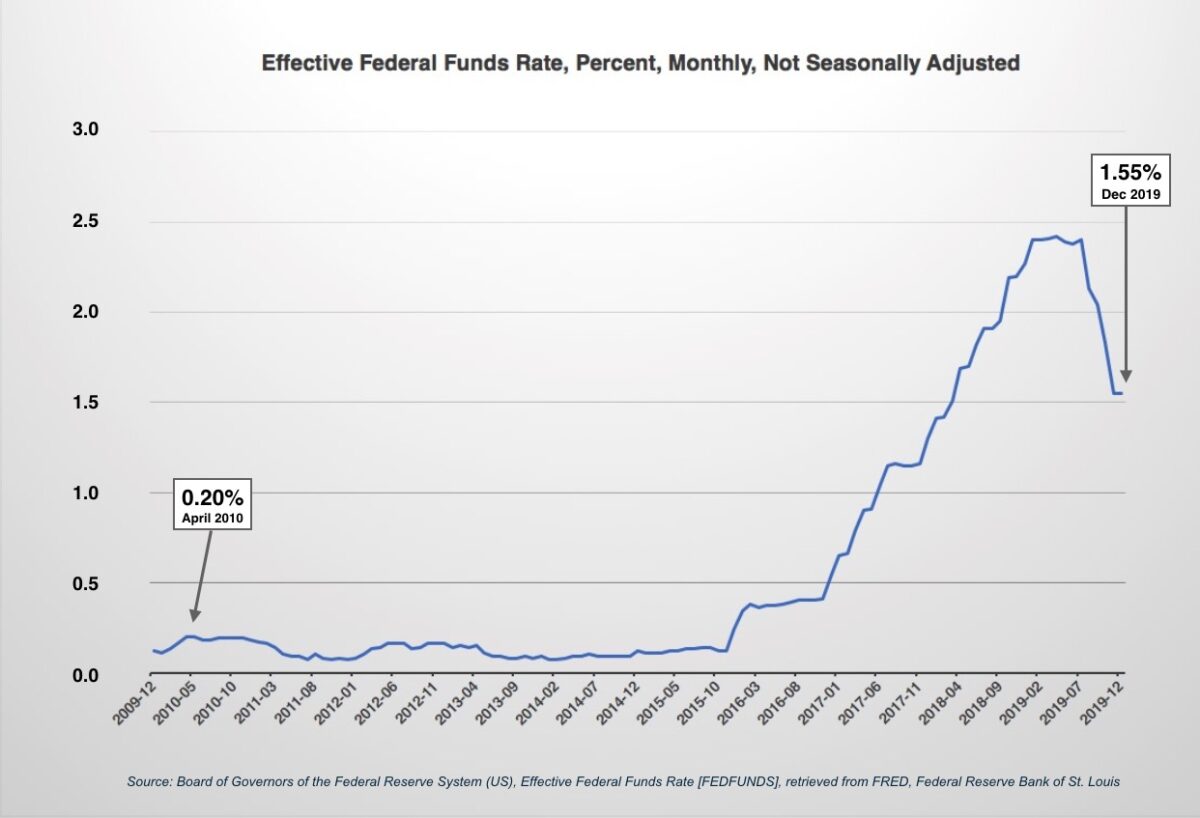 A comparison of a decade of federal funds rates, United States 10-year Treasury maturity rates, and mortgage rates shows a high correlation between the latter two. In contrast, the Fed-driven interest rate curve has a markedly different shape. 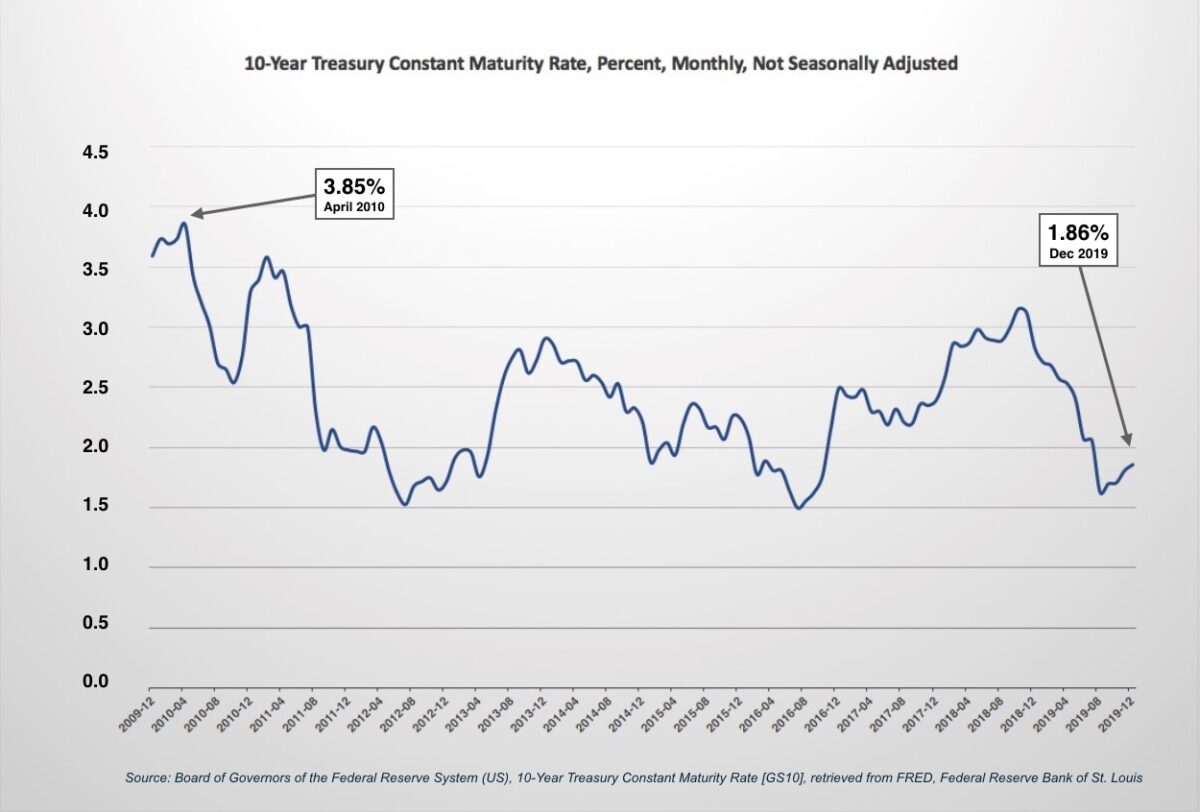 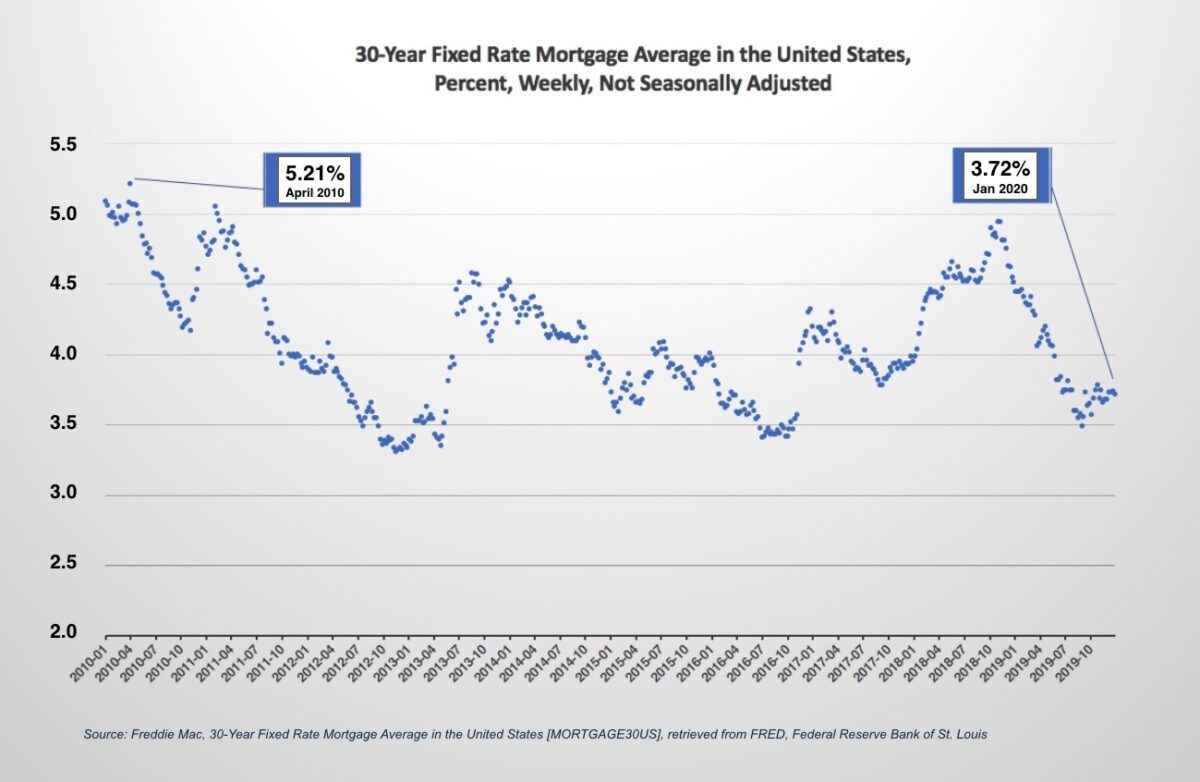 Mortgage buyer Freddie Mac said Thursday the average rate for a 30-year fixed-rate mortgage eased to 3.72 percent from 3.74 percent last week. The benchmark rate stood at 4.51 percent a year ago, from a 10-year peak of 5.21 percent in April 2010.

Volatile interest rates earlier last year caused a slowdown in the housing market, Khater noted, adding that low mortgage rates and a strong job market are “setting the stage for a continued rise in home sales and home prices.”

For all of 2019, the 30-year loan averaged 3.9 percent, the fourth-lowest annual rate since Freddie Mac began tracking it in 1971, according to the company.