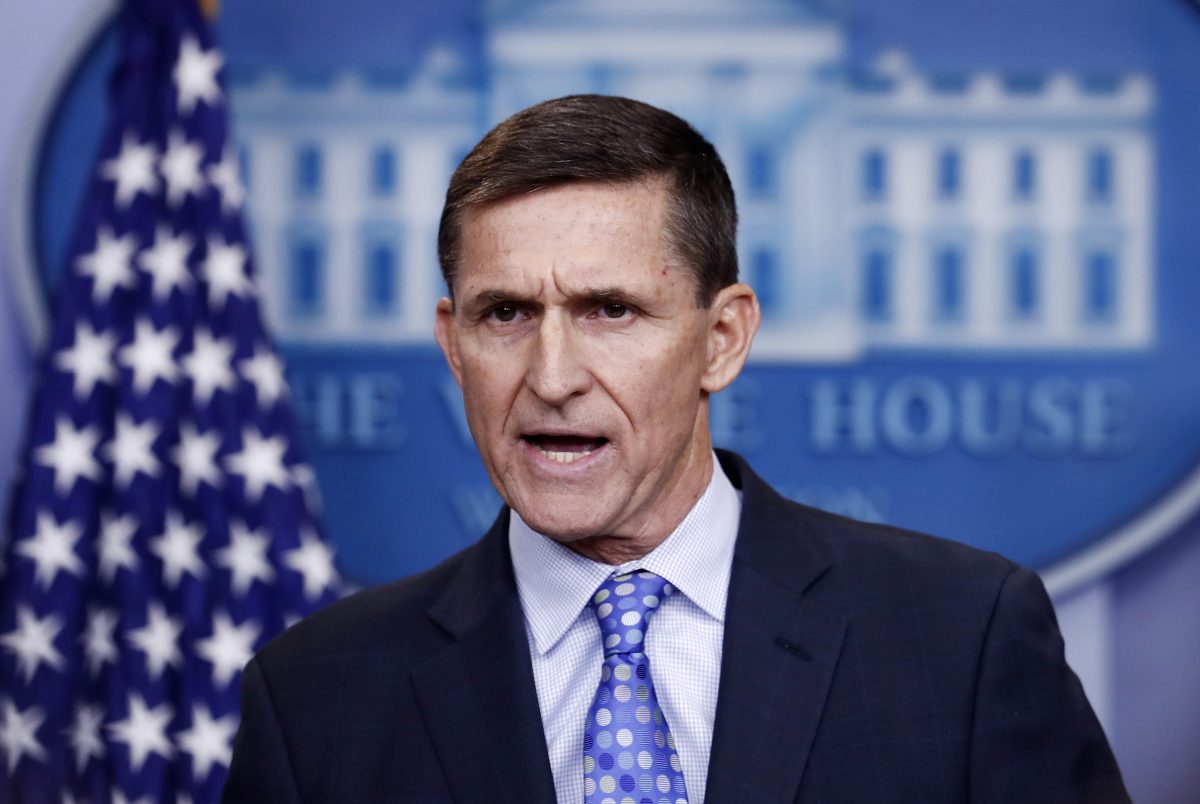 “This evinces the strong inference the prosecutors themselves conspired to cause Mr. Flynn to make false statements,” Flynn’s lawyer, Sidney Powell, said in a Jan. 16 court filing (pdf).

Conspiring to make someone lie to the government is a federal crime punishable by up to five years in prison, Powell noted.

Flynn, former head of the Defense Intelligence Agency, pleaded guilty on Nov. 30, 2017, to one count of lying to the FBI about conversations he had with then-Russian Ambassador to the United States Sergei Kislyak in December 2016. He also pleaded that he lied in a foreign lobbying registration filing about a job his firm did in 2016 for a Turkish businessman Ekim Alptekin.

In a Jan. 7 sentencing memo (pdf), prosecutors asked for 0-6 months in prison for Flynn, which is harsher than what Flynn expected. They acknowledged Flynn cooperated with the government, but said he reneged last year on helping the government in a case regarding lobbying registration against his former business partner Bijan Rafiekian. Flynn wasn’t charged in that case. Rafiekian was ultimately acquitted because of insufficient evidence.

In response to the sentencing memo, Flynn asked the court on Jan. 14 (pdf) to allow him to withdraw his plea, saying the prosecutors are trying to retaliate against him because he refused to lie for them.

Alptekin hired FIG in the summer of 2016 to do research and lobbying focused on an Islamic cleric living in exile in Pennsylvania, Fethullah Gulen. Gulen runs a group that Turkish President Recep Tayyip Erdogan blamed for an attempted 2016 coup. Prosecutors said Flynn lied in the FARA forms about the extent the Turkish government was involved with the project.

In June, after Flynn fired Covington and hired new lawyers led by Powell, prosecutors asked Flynn to testify that he signed the lobbying forms intentionally knowing there were lies in them. He refused, saying he only learned about the issues with the forms in retrospect.

But Powell now argues that the prosecutors knew they were asking for a false statement. She filed with the court a draft of Flynn’s Statement of Offense which shows that the words pertaining to the FARA registration “FLYNN then and there knew” were cut from the final version.

Moreover, Powell submitted emails that indicate the words were cut by the prosecutors themselves after Flynn’s then-lawyers raised some objections to the draft.

“Point is they knew that what they were demanding Flynn do was lie about himself and admit he did something that all along he said he didn’t,” Powell commented in an email to The Epoch Times.

Powell went further and argued that even the final Statement of Offense was inaccurate when it came to the lobbying forms.

The statement says that the lies were:

1) That “FIG did not know whether or the extent to which” Turkey was involved in the Inovo project;

2) That Turkey didn’t provide “supervision and direction” for the project;

3) That FIG “understood the engagement to be focused on improving U.S. business organizations’ confidence regarding doing business in Turkey;”

4) And that Flynn published an op-ed in The Hill about Gulen written “on his own initiative” and not at the “direction or control” of Alptekin.

In Powell’s view, all four points were wrong.

1) The first false statement actually isn’t anywhere in the FARA filing. What the registration did say is that “FIG did not know whether or the extent to which” Turkey was involved “with its retention by Inovo for the three-month project.” Powell argues that this is accurate.

Flynn told the prosecutors that there was initially some talk about Turkey paying for the job, but that it then changed to Inovo being the one to pay. He said he didn’t know where the money ultimately came from and that he didn’t care.

2) As for the “supervision and direction,” Powell said there’s no evidence Turkey directed or supervised FIG’s work.

Flynn said in his 2018 grand jury testimony that the project was always “on behalf” of Turkey in the meaning that it was “in support” of the Turkish government. He acknowledged that when Convington’s lawyers talked to him before the FARA filing, he didn’t tell them about the Turkey connection in these terms.

He also said that Turkish officials were “aware” of the project and “acknowledged” it as Aptekin was keeping them appraised and was getting back to FIG with a “sense of what they felt.”

3) As for the focus of the project, the FARA filing did mention business confidence, but added “particularly with respect to the stability of Turkey and its suitability as a venue for investment and commercial activity.”

Whether it was to restore confidence in the Turkish government itself or in doing business in Turkey, it was “all one in the same to me,” Flynn said. Since they were only hired for 90 days, they decided to boil it down to focusing on Gulen, he said.

4) With regards to the op-ed, Flynn said he first learned about it when Rafiekian sent him a draft of it. But the FARA filing doesn’t say anything about who wrote the article. It only says that Flynn “published” it “on his own initiative.”

Van Grack “conflated ‘published’ with ‘written by’ in his prosecution,” Powell said in the Jan. 16 filing.

The FARA filing “was substantially correct in all material respects,” Powell said in the Jan. 14 filing, noting that “it gives a reasonable and correct picture of the relationship, and it certainly identifies Turkey as a ‘principal beneficiary’—the primary purpose of the filing.”

“New counsel spent days scouring Covington’s notes and other documents that unequivocally demonstrated that Mr. Flynn told them the truth,” Powell said. “Emails, notes, and documents in the possession of Covington from January 2, 2017, prove that it had the information to make a correct FARA filing.”

Van Grack didn’t respond to a request for comment.