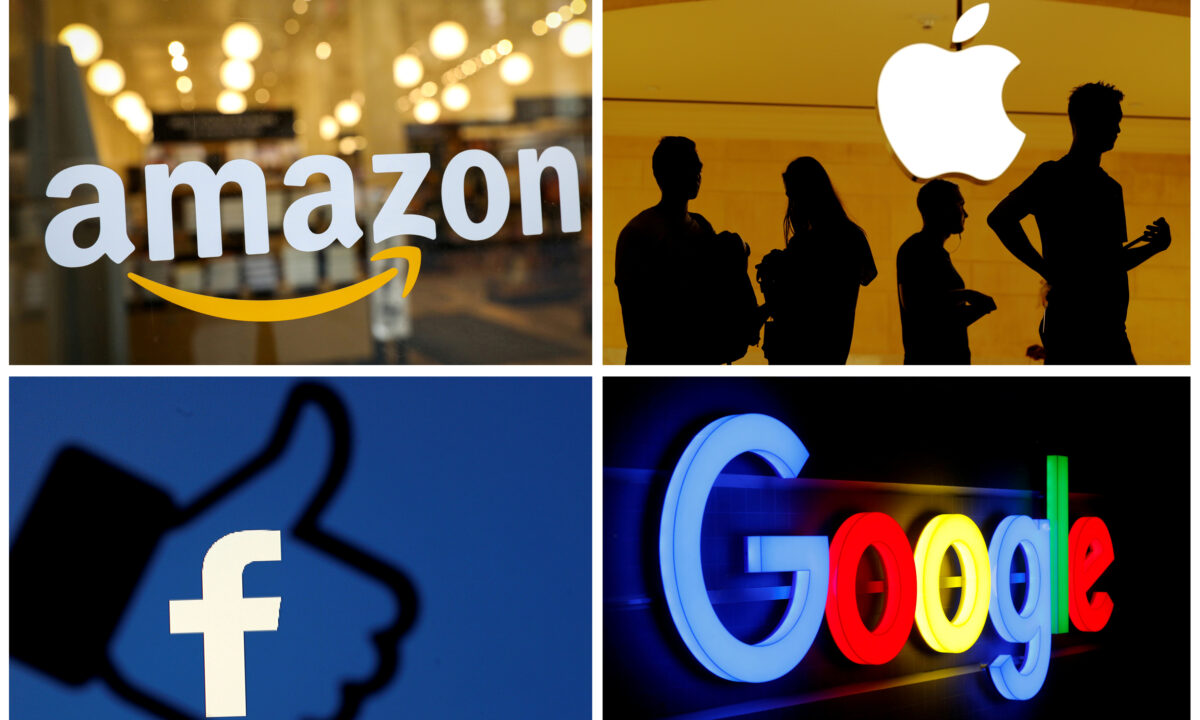 As a handful of antitrust probes into Big Tech continue there is much debate on whether such platforms would actually be broken up, face a less impactful restriction remedy, or see no repercussions at all.

The possibility of one or more of the “Big Four” splitting apart is widely contested. Among a handful of antitrust and IT experts, some told The Epoch Times the likelihood of this happening was next to none—others were adamant that at least one company would face some form of divestiture.

The present, intense scrutiny against titan platforms Facebook, Google, Amazon, and Apple is something not seen before as Congress investigates all four, while the Justice Department (DOJ) and the Federal Trade Commission (FTC) are reportedly reviewing one or more of the companies.

The probes extend down to the state level as well with dozens of state attorneys general probing the practices of Facebook and Google in separate cases. The barrage of investigations which appear to still be in the beginning stages, comes amid broad concerns about the effects the companies have on competition and consumers.

Doug Melamed, a law professor at Stanford University with expertise in antitrust law and intellectual property, said the probes could result in a wide range of theoretical outcomes “from new legislation to no litigation at all.”

“As a practical matter, I think the most likely outcomes are somewhere in the middle, some kind of litigation that will probably result in a settlement with restrictions on the conduct of one or more of the platforms,” Melamed told The Epoch Times via email.

The chances of one of the platforms being broken up is “close to zero” according to Melamed, who said other forms of less impactful structural relief or a “conduct remedy” that might restrict future acquisitions are more likely.

“While a litigated victory for the defendants is possible, I think the more likely outcome is some kind of conduct remedy that restricts the defendant from using its dominant platform to give it an inappropriate advantage in complementary markets,” he said.

Sally Hubbard, former Assistant Attorney General at the Antitrust Bureau of New York State, told The Epoch Times some of the possible outcomes include “lawsuits by enforcers over conduct that violates antitrust laws, the unwinding of mergers deemed to have been anticompetitive, and new laws or regulatory rules governing Big Tech.”

Hubbard, who is now Director of Enforcement Strategy at the Open Markets Institute, said a breakup of a company is only one type of antitrust remedy and “relatively rare.” In her work, Hubbard engages with state attorneys general who have significant authority over monopoly power.

Big Tech should either run their platforms or compete on their platforms, “but not both,” she added. Splitting apart a company could start to address some of the existing conflicts of interests but it would not solve the competitive issues in the industry.

The House Judiciary Committee is expected to complete a final report on its findings by the “first part” of this year the committee’s chairman, Rep. David Cicilline (D-R.I.), told reporters last year. It’s unclear what the exact date would be.

Leaders of the committee and its sub-committee on antitrust have demanded the four companies turn over a wide range of documents including sensitive internal emails from the companies’ top executives as well as detailed financial information, among other company records.

“In my view, we’ll see at least one company breakup as a result of the current investigations, but it will come in the form of a settlement as opposed to forceful breakup by the DOJ,” Sean Herman, founder & CEO of Kinzoo, a private messenger app told The Epoch Times via email.

“I think the most likely action will be Amazon splitting off Amazon Web Services, it’s cloud computing division into a separate entity,” Herman added. “There should be strong arguments for breaking YouTube apart from Google, and Instagram from Facebook as well, as long as consumer welfare isn’t the deciding factor.”

Any potential actions against these companies hinges greatly on the role consumer welfare plays in the probes, Herman said.

At an early hearing of the antitrust panel in July, executives of the four companies pushed back against lawmakers’ accusations that they operate as monopolies, laying out ways in which they say they compete fairly, yet vigorously, against rivals in the marketplace. Cicilline said he was not convinced with answers the executives gave, calling their testimony “evasive.”

Lopatka said via email he “fully expects” some antitrust claims “to be brought by some public plaintiff’s against at least some of the big tech firms.” The odds of a public enforcer forcing at least a few big tech companies to divest something is “excellent” he added, with Facebook and Google being the most likely.

“These firms are in the crosshairs,” he said. “The congressional investigation could lead to new legislation. That legislation might define certain practices of big tech firms to be anticompetitive, or it might impose some kind of government regulation of these firms. The scope of potential legislation is broad.”

But whether the plaintiffs succeed in their case in court is another matter, Lopatka added.

In July 2019, the DOJ announced that its antitrust division is “reviewing whether and how market-leading online platforms have achieved market power and are engaging in practices that have reduced competition, stifled innovation, or otherwise harmed consumers.”

At this stage, it appears big tech companies would prefer to get ahead of getting embroiled in any possible antitrust cases and “attempt to placate the concerns of regulators and make certain concessions on their own terms,” Attila Tomaschek, digital privacy expert at pro-privacy.com, told The Epoch Times via email.

The last time both state and federal levels were part of a major antitrust case was during 2001 in the United States v Microsoft Corp. case involving the latter’s alleged monopoly on the PC market. Those probes, however, were only focused on one company, in contrast to today’s climate.

In November 2001, the DOJ reached a settlement agreement with Microsoft that imposed a “broad range of restrictions” on the company. The court didn’t end up ordering any divestiture.

The Microsoft case sets an important precedent since it shows how antitrust laws can be used to address anticompetitive conduct by major platforms as well as for “establishing the principle that a monopolist can injure competition just by raising entry barriers to new competition against its monopoly position,” according to Melamed.

In 2012 the U.S. government permitted Facebook’s acquisitions of Instagram in 2012 and Whatsapp in 2014. Lopatka said courts are wary of undoing mergers several years after the fact and that Facebook for example would strive to maintain that any merger challenge now would be unfair.

“I don’t know what the chances are this kind of a challenge will succeed, but if any firm is going to be broken up, the reason will almost certainly be that the firm illegally acquired competitors,” Lopatka said.

Lopatka said similar arguments in the Microsoft case could be leveled against Facebook and Google in particular, in that Microsoft maintained a monopoly of the PC operating system market by squashing the web browser Navigator and Java technologies.

Meanwhile, Hubbard said there are similarities to the current probes and the United States v Microsoft case.

“Just like Microsoft, Google, Amazon, Facebook, and Amazon are engaging in conduct that, in my opinion, amounts to illegal monopolization,” she said. “Illegal monopolization requires both 1) monopoly power and 2) that the firm acquired, enhanced, or maintained that power by excluding competition.”

There are also different ways companies can be split up. During the Microsoft case some observers advocated for vertical divestiture that would have separated Microsoft’s operating system business from its applications business, Lopatka said. Others pushed for horizontal divestiture, which would have involved divulging proprietary code to create several operating system competitors.

“The Microsoft example is merely intended to give a sense of the broad range of divestitures that might be proposed,” he added. “But Microsoft was a monopoly maintenance case, not a case based on illegal acquisitions.”

According to Melamed, the facts and theories in the Microsoft case are “very different” from what the current probes are likely to develop into. Microsoft was about using monopoly power in PC operating systems to protect that monopoly from new competition. It’s not clear if the current probes will consist of allegations of that same conduct.

Lopatka said if the theory on antitrust violations are anticompetitive acquisitions, “the easiest remedy is to require the offender to divest the businesses it illegally acquired,” though he noted it would be problematic if the the acquisitions took place years earlier.

“As a general matter in tech markets, attempting to create effective competition through structural remedies is exceptionally difficult,” he said. “And structural remedies are a drastic remedy and are disfavored when a firm acquires monopoly power through exclusionary conduct.”