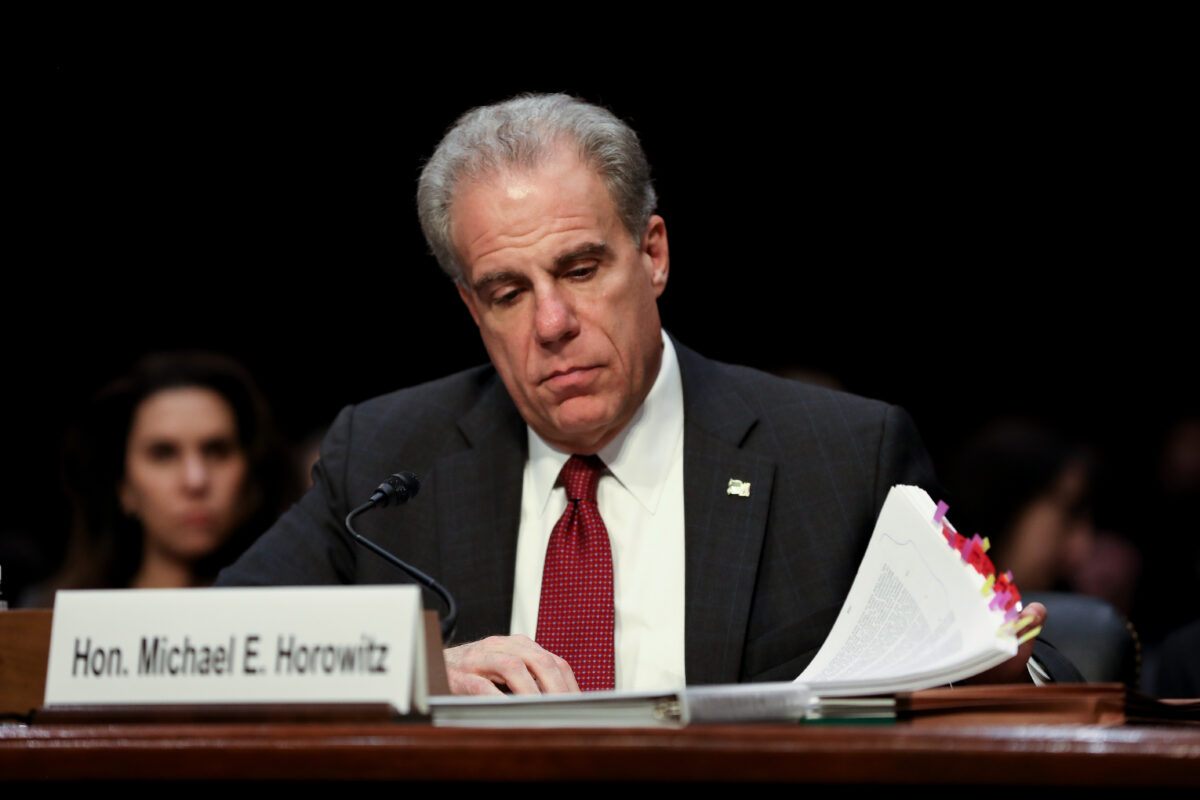 The Justice Department watchdog determined that the FBI failed to properly document the facts in 29 Foreign Intelligence Surveillance Act (FISA) applications reviewed for an audit.

The findings are part of a report (pdf) released on March 30 by the Department of Justice Office of Inspector General. The office had previously found widespread fundamental and serious errors in the FISA applications used to spy on Trump campaign a**ociate Carter Page.

The review of the Page applications determined FBI agents broke bureau policy by failing to adequately maintain a so-called “Woods file,” a set of records substantiating the factual a**ertions in surveillance applications. The flaws with the surveillance of Page prompted the inspector general to launch a review of the Woods procedures throughout the bureau, which in turn unearthed pervasive errors spanning every FISA application audited.

“We believe that a deficiency in the FBI’s efforts to support the factual statements in FISA applications through its Woods Procedures undermines the FBI’s ability to achieve its ‘scrupulously accurate’ standard for FISA applications,” the report stated.

The inspector general also reviewed the internal audits the FBI conducted on 42 FISA applications and similarly found that “these oversight mechanisms routinely identified deficiencies in documentation supporting FISA applications,” similar to those flagged during the watchdog’s review.

The flaws in the internal audits are especially notable because FBI agents were warned about an audit in advance and had the opportunity to retroactively plug gaps in the Woods Files. Of the 42 applications reviewed, 39 had a “total of about 390 issues, including unverified, inaccurate, or inadequately supported facts, as well as typographical errors.” Just three applications had no issues.

The FBI officials responsible for reviewing the Woods procedures had access to the internal reports but did not use them to ensure that the statements the FBI submitted to the Foreign Intelligence Surveillance Court were “scrupulously accurate,” as is required by bureau policy.

The applications sampled for the inspector general audit had an average of 20 issues each. One application had approximately 65 issues.

The inspector general’s findings suggest that at least some of the serious errors found in the case of the Trump-campaign a**ociate may have been part of a bureau-wide failure. The motives behind the errors in the Carter Page surveillance remain a hotly contested issue even after the inspector general’s review did not find any evidence that the missteps stemmed from political bias.

Some of the FBI officials involved in the investigation of the Trump campaign expressed intense bias against then-candidate and eventually President Donald Trump. Text messages between FBI special agent Peter Strzok and bureau attorney Lisa Page exposed the pair’s hatred of Trump, discussions about an insurance policy in case he became president, and plans to stop Trump from winning the election.

An unverified dossier of opposition research on Trump compiled by a former foreign spy played a crucial role in the FBI’s decision to seek a warrant to spy on Page. That dossier was funded through a law firm by the Clinton campaign and the Democratic National Committee.

The applications used for a warrant to surveil Page cast him as an agent of Russia, despite the FBI being in possession of evidence to the contrary which was not included in the applications. Notably, the FBI was advised by the CIA that Page was working with the agency and had regularly reported on his contacts with Russians.

The FBI is already undergoing an overhaul of its surveillance practices in response to an order from the FISC. A judge required the bureau to embark on a set of reforms that would convince the court that the surveillance applications by the FBI can be trusted.

“Regardless of whatever ‘reforms’ FBI leaders voluntarily adopt, it’s clear their operations require close oversight by congressional leaders who actually care about Americans’ civil liberties and will not approve of improper spying when it’s aimed at their political opponents,” House Intelligence Committee Ranking Member Devin Nunes (R-Calif.) said in a statement to The Epoch Times.

The FBI responded to the OIG’s latest findings by noting that the flaws identified in the review “underscore the importance” of the reforms the FBI is already carrying out. The bureau also agreed to implement the inspector general’s suggested remedies.

The bureau said it will begin using the results of its internal FISA application audits to enhance compliance with Woods procedures through training and, if appropriate, new policies. The FBI also went beyond the inspector general’s recommendation to ensure that each FISA application submitted to the secret court in pending investigations had an accompanying Woods File. The bureau said it would not only review the applications in active cases, but ensure that every application dating back to 2015 has a Woods File.

“As Director Wray has stressed, FISA is an indispensable tool to guard against national security threats, but we must ensure these authorities are carefully exercised and that FISA applications are scrupulously accurate,” FBI a**ociate Deputy Director Paul Abbate wrote.