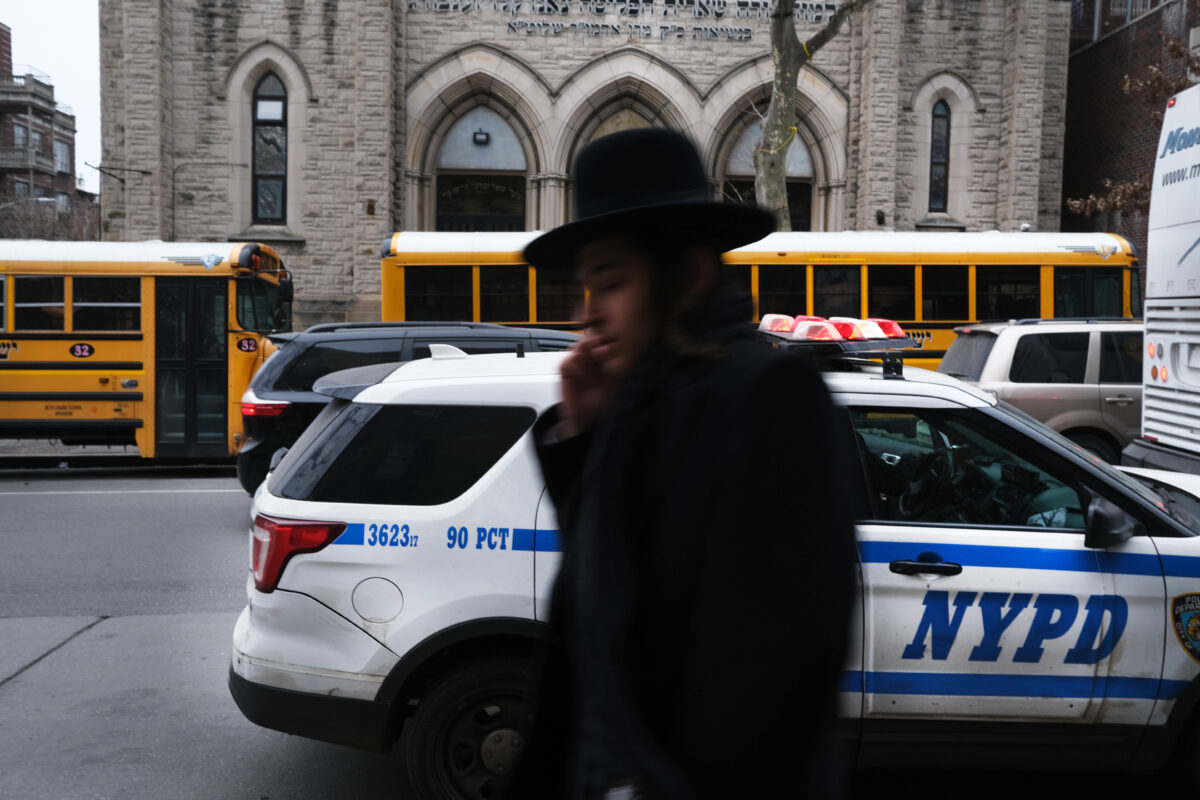 With over 13 anti-Semitic attacks in New York state in December, leaders call for drastic measures to address the threat

NEW YORK—The spate of anti-Semitic acts carried out over the past few months across the New York metropolitan area is unprecedented, Jewish leaders say, with one calling the violent nature of the incidents “fundamentally alien to the American experience.”

In interviews with The Epoch Times, Jewish leaders based in New York City shared what they believe the attacks have stemmed from, and why they are occurring. They noted the increasing degree of polarization within our society and spoke about strengthening hate crime laws to deter targeted acts, as well as community and government responsibility to ensure safety.

A former Israeli justice minister says that she’s “deeply concerned” over the “rise in anti-Semitic attacks in New York and around the world.”

“All people of conscience must be outraged by the fact that 75 years after the Holocaust, Jews are once again being targeted at prayer and in the streets,” former Justice Minister Ayelet Shaked told The Epoch Times.

Meanwhile, lawmakers are urging New York’s governor to declare a state of emergency over the string of anti-Semitic crimes and to deploy the National Guard to patrol Orthodox Jewish neighborhoods.

On Dec. 30, a man was charged with federal hate crimes for stabbing five people who were celebrating Hanukkah at a rabbi’s home north of New York City, in the Orthodox Jewish community of Monsey in Rockland County, New York. Authorities said they found handwritten journals containing anti-Semitic references in the home of the suspect, who was identified as 37-year-old Grafton Thomas.

Thomas, who has pleaded not guilty to five state charges of attempted murder and one count of burglary, is facing five counts of obstructing the free exercise of religious beliefs by attempting to kill with a dangerous weapon and causing injuries. He was arrested in New York City within hours of the attack.

The rampage, carried out with a machete, was just the latest in a flurry of attacks in the New York area. Earlier in December, a shooting at a kosher supermarket in New Jersey left two Hasidic Jews dead, and in a separate incident in November, a man was stabbed while walking to a synagogue in the Monsey area.

“In my own recollection, I cannot recall a time in America where we’ve seen as many acts of violent anti-Semitism that we have seen,” Allen Fagin, executive vice president and chief professional officer of the Orthodox Union (OU), told The Epoch Times.

OU, one of the largest Orthodox Jewish organizations in the nation, is headquartered in New York. Roughly a third of the population of New York’s Rockland County is Jewish, including a large enclave of Orthodox Jews who live in secluded communities.

“There’s been anti-Semitism for thousands of years and that is almost a permanent condition of the Jewish people,” Fagin said. “But what we’ve seen in the last period of months is an increase in violent criminal activity.”

Fagin added that there is something that has “loosened those bonds of constraint.”

According to New York Gov. Andrew Cuomo, there have been 13 anti-Semitic attacks in New York since Dec. 8, 2019.

On Dec. 27, the New York City Police Department said it would step up patrols in heavily Jewish neighborhoods in the borough of Brooklyn, following at least eight anti-Semitic incidents in two weeks. In an official statement, Cuomo also said that he’s directing state police to “increase patrols and security in Orthodox Jewish neighborhoods across New York State.”

The shocking nature and the sheer number of anti-Semitic attacks has also caught the attention of top Israeli officials, with Prime Minister Benjamin Netanyahu on Dec. 30 condemning the recent displays of anti-Semitism.

Shaked, via text message, said “we must combat all forms of anti-Semitism, whether from the far-right, far-left, or radical Islamists,” adding that it is inconceivable these kinds of attacks are still taking place today and are increasing around the world.

She called on all governments and municipalities to adopt the International Holocaust Remembrance Alliance definition of anti-Semitism, “as President Donald Trump did through his recent Executive Order.”

Adopting the definition would “provide physical security to Jewish communities, and … swiftly prosecute all anti-Jewish hate crimes to the full extent of the law,” Shaked said.

The State of Israel, she added, “will always stand with Jewish communities and democratic governments around the world in the fight against anti-Semitic hate.”

Cuomo, meanwhile, called the Monsey rampage “an act of domestic terrorism that sought to incite hate and generate fear.”

A ‘Different Kind of Ferocity’

Jewish leaders said they haven’t seen such levels of violent anti-Semitic acts before, and in such quick succession. The president’s daughter, Ivanka Trump, who is Jewish,wrote on Twitter, “Attacks on Jewish New Yorkers were reported almost every single day this past week.”

In prior cases of hate crimes, individuals often copy the behavior of others, but there are more complicated and “pervasive underlying causes” that need to be examined, Fagin said.

“Why these attacks? Why now? And why with a fundamentally different kind of ferocity than we have seen previously,” he said. “It’s one thing to scrawl a swastika on a sidewalk … another to walk into a place of worship and kill people.”

“This is something that is so fundamentally alien to the American experience that I think everyone is trying to understand—where does this come from?”

Over the past few years, hate crime incidents overall have steadily increased, according to data from the FBI.

Rabbi Joseph Potasnik, executive vice president at the New York Board of Rabbis, told The Epoch Times there is a general lack of civility and lack of respect for people deemed different, calling it a “disease has spread into too many places and too many people.”

“There is intolerance for difference, and unfortunately, the Jews have been on the front lines of these attacks throughout history,” Potasnik said in a previous interview. “We are often depicted as being on the other side, we walk on a different path than everybody else, and because of that, we are subjected to this hatred that doesn’t go away.”

In wake of the string of attacks, four Orthodox Jewish lawmakers signed on Dec. 29, 2019, a joint letter to Cuomo, urging the governor to declare a state of emergency and to “deploy the New York State Police and the New York National Guard to visibly patrol and protect Orthodox Jewish neighborhoods throughout our state.”

In the letter, the lawmakers wrote that anti-Semitic hate crimes have risen to “frighteningly high numbers” in the past few months and that Orthodox Jews have been targeted “with a rash of violence unseen in modern history.”

They also asked Cuomo to appoint a “special prosecutor for purposes of investigating and prosecuting perpetrators of anti-Semitic violence.” Lawmakers said that the prosecutor should “immediately assume control of cases already under the jurisdiction of local district attorneys.”

According to Fagin, part of the solution to ending the attacks is more police protection and stronger laws that make hate crimes the “first priority in how they’re dealt with and how they are prosecuted, as well as the punishments given to perpetrators.”

Potasnik, meanwhile, cast some of the blame on new bail reform laws passed in April 2019, noting that some of the perpetrators in the recent spate of attacks have been quickly released without bail. The legislation was estimated to cause at least a “40 percent reduction overall in the state’s pretrial jail population,” according to the Vera Institute of Justice.

“I don’t think that was the purpose of the legislation,” Potasnik said, referring to the quick catch and release of the perpetrators.

While there is a role for the government to play in increasing security and protection, Fagin said the Jewish community also has an obligation to do “everything possible to protect ourselves.”

That includes, for example, making sure their institutions have the physical surroundings and equipment necessary to secure physical premises. Those attending services should also have training in how to deal with emergency situations, including training on active-shooter situations, he said.