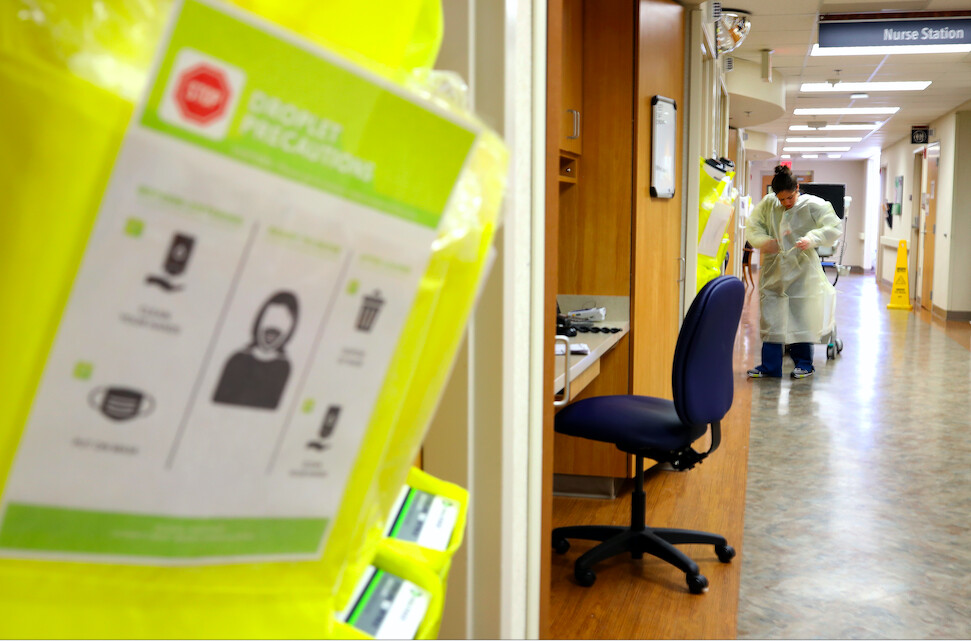 A nurse anxiously awaits her COVID-19 test results. It’s been almost a week since she was tested, and the wait is tough—she can’t work, her daughter is also exhibiting symptoms, and her 80-year-old parents live with her.

The nurse, identified as “Anna,” requested to use a pseudonym because she isn’t authorized to speak to the media.

Anna works at a hospital north of Seattle and was exposed to a fellow health care worker who has since tested positive for COVID-19.

“I’m afraid that the personal protective equipment (PPE) that’s being provided to hospital workers, I don’t think it’s an effective means to prevent transmission,” Anna told The Epoch Times on March 20, the day she was tested. “So I think there’s going to be quite a lot of hospital staff getting sick as a result of that.”

She said the Centers for Disease Control and Prevention (CDC) initially advised health care workers to use a higher-grade protective mask known as the N95 respirator.

“But that isn’t available,” she said. “So now the CDC has issued a statement that in the absence of those respirators, regular surgical masks with eye protection is an acceptable alternative.”

Anna is skeptical that science backs the assertion that regular masks are an acceptable alternative. Instead, she believes it’s because there’s a limited supply of the N95 masks.

“Here’s my analogy: I feel like we’re standing in front of a firing squad holding up cardboard boxes, using cardboard boxes as shields. It’s so terrifying,” she said.

The CDC states on its website that if N95 respirators are unavailable, surgical masks can be used, and “as a last resort,” masks that haven’t been approved, or even homemade masks, can be used. “However, caution should be exercised when considering this option,” the CDC states.

The head of the Federal Emergency Management Agency (FEMA) said on March 22 that urgently needed supplies are now being shipped to hospitals from the national stockpile.

Protective masks are among “hundreds of thousands of millions of things that we’re shipping from the stockpile,” FEMA administrator Peter Gaynor told ABC’s “This Week.”

“We’re prepared to go to zero in the stockpile to meet demand,” Gaynor said, acknowledging a shortage of test kits and protective equipment in many areas nationwide.

Lack of Tests and Speed of Results

Compounding the issue further are the overall lack of testing and that test results are taking at least five days to come back, Anna said. The hospital where she works only tests patients who are sick enough to be hospitalized.

“There’s no testing whatsoever taking place for patients who are coming in with fevers and coughs and shortness of breath—none,” she said.

“And even those [hospitalized] patients, if there could be a theoretically plausible other explanation for their illness, they still won’t be tested either.”

The time it takes for test results to come back means health care workers are burning through their supplies of PPE more quickly, as they need to wear it when attending to potential COVID-19 cases, as well as for patients with other types of infectious conditions.

“Quite a few [tests] are coming back negative. But for five days, we’re having to go through our very limited supply of equipment for people who don’t have it,” she said.

“I think this dire lack of testing and the dire lack of personal protective equipment for health care workers could derail us. I just feel like those are the two things that are going to be catastrophic for us.”

She’s concerned the hospital is not prepared. It did just purchase more ventilators, Anna said, but she doesn’t feel protected as a health care worker.

“That’s not just a problem with my hospital, that’s the whole country,” she said.

A cluster of 35 deaths linked to a nursing home in Seattle made it the initial epicenter of the outbreak in the United States.

Boeing—the largest private employer in the state—suspended production at its Washington facilities on March 23 due to the pandemic.

Hours later, Washington Gov. Jay Inslee issued a “stay at home” order, which is expected to last for at least two weeks. The proclamation closes all but essential business, bans social gatherings, and asks residents to stay home. People who do venture outside for recreation purposes or essential shopping should remain at least six feet from each other, the order states.

Inslee’s office didn’t return a request for an update on the number of masks and tests it may be receiving for hospitals in the state.

Aside from professional concerns, Anna is worried about her 80-year-old parents, who live at home with her. Elderly people and those with underlying conditions have been found to be more susceptible to COVID-19.

“I try to wear a mask when I’m at home around them,” she said. “But my mom is super hard of hearing, and if I’m wearing a mask, she can’t hear me at all. So I have to take the mask off for her to even hear me. It’s super overwhelming.”

She’s also exhausting her paid time off in self-quarantine while she waits for her test results, which she says could have a turnaround time of hours.

“I’m put in this terrible, terrible bind of having to choose,” she said. “Can I afford to take the time off work? Because what if next week I get exposed to it, and it’s the real thing, and I have to be out for a month, and I just burned through my paid time off for allergies?

“In my mind, it comes down to this lack of testing that makes it impossible to make informed decisions.”

By press time, Anna had not yet received her test results. She is still off work. But she’s ready to jump back in as soon as she’s cleared. “This is just starting,” she predicts, as far as the worst of the epidemic hitting hospitals in the United States.

The Epoch Times refers to the novel coronavirus, which causes the disease COVID-19, as the CCP virus because the Chinese Communist Party’s coverup and mishandling allowed the virus to spread throughout China and create a global pandemic.