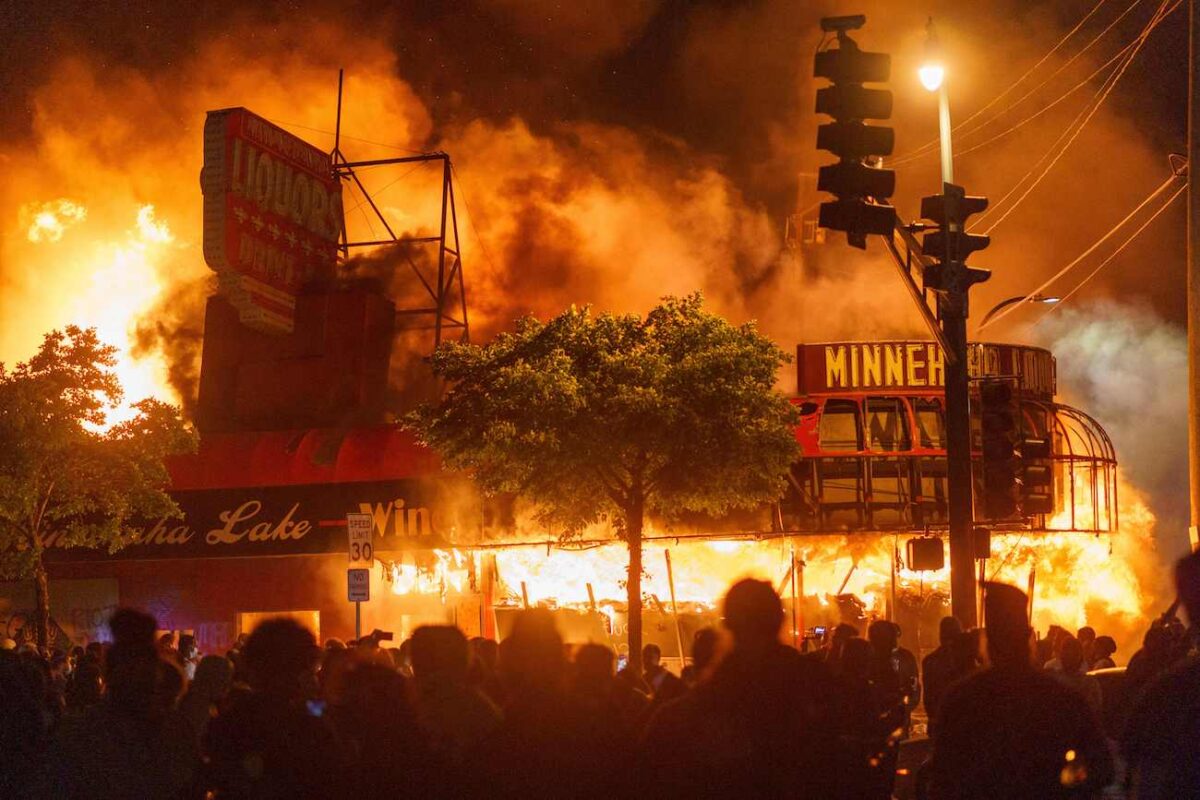 Mandatory curfews have been issued for Minneapolis and nearby St. Paul after three straight nights of protests, two of which involved increasingly violent activities, including looting and arson, following the death of George Floyd.

Mayor Frey has issued Emergency Regulation No. 2020-2-1 which imposes a curfew throughout the City of Minneapolis beginning at 8 p.m. tonight (Fri., May 29) and extends through the weekend.
See the posted regulation for details at: https://t.co/iebgleKnyx pic.twitter.com/7l61oURPtc

To “protect the public health, safety, and welfare,” people “must not travel on any public street or in any public place” during the curfew hours, according to the curfew orders.

The order also says that “law enforcement, fire, medical personnel, and members of the news media, as well as other personnel authorized by the City of Minneapolis, City of Saint Paul, the Minnesota Department of Public Safety, Minnesota State Patrol, or Minnesota National Guard, are exempt from the curfew.”

We have implemented a temporary nighttime curfew in Minneapolis and St. Paul in order to restore peace.

It will be in effect from 8pm-6am on Friday and Saturday night. I urge Minnesotans to comply – It’s time to rebuild our community.

“I urge Minnesotans to comply – It’s time to rebuild our community,” Walz said in a statement.

Frey’s order noted that “much of the destruction and violence has taken place under the cover of darkness.”

Protests erupted Tuesday, a day after Floyd’s death following a confrontation with police that sparked national outrage. Several businesses and buildings within the city’s Third Precinct and surrounding areas have been significantly damaged, looted, or burned, after protests became more violent and widespread on Wednesday and Thursday night.

Minneapolis Police Chief Medaria Arradondo said on Thursday at a press conference that many of the people who looted businesses and set fires on Wednesday night, the second night of protests, are not believed to be from Minneapolis. He added that “the crowds got large and they became more mobile” on Wednesday night.

“It was clear to me and also hearing from our local community leaders, that many of the people that were involved in the criminal conduct last night were not known Minneapolitans to them,” Arradondo told reporters on Thursday.

A man was also shot to death on Wednesday night and police said they were investigating the death as a homicide and had a suspect in custody. On Thursday, rioters set on fire the Third Police Precinct, which is near the area where Floyd died. Protest also spread to nearby St. Paul by Thursday.

Floyd, a 46-year-old father of two, died while in police custody at the city’s Third Police Precinct on Monday, May 25.

Disturbing video footage from Monday showed 44-year-old police officer Derek Chauvin using his knee on Floyd’s neck to pin him to the ground for almost 8 minutes until Floyd became unresponsive. Floyd, who was unarmed and handcuffed, pleaded to the officers while repeatedly calling out “I can’t breathe” during the episode.

Chauvin was fired on Tuesday, along with another three officers involved in Floyd’s arrest—Thomas Lane, Tou Thao, and J. Alexander Kueng. On Friday, Chauvin was arrested and charged of third-degree murder and second-degree manslaughter in connection with Floyd’s death.

Police had earlier responded to a 911 call by a store clerk alleging Floyd had used a counterfeit bill and that he was behaving erratically.

A restaurant’s security video footage of the event showed “what appears to be the start of the confrontation between George Floyd & Minneapolis police officers,” CBS News reported on Tuesday. In the video, Floyd does not appear to resist arrest as police take him into custody.

Minneapolis Police said in a statement on Tuesday that officers were responding to a report of forgery when the suspect “physically resisted officers.” According to the statement, Floyd died after “suffering medical distress.”

The Minnesota National Guard and state patrol officers were deployed to Minneapolis in the early hours of Friday, just after midnight, in an attempt to quell riots.