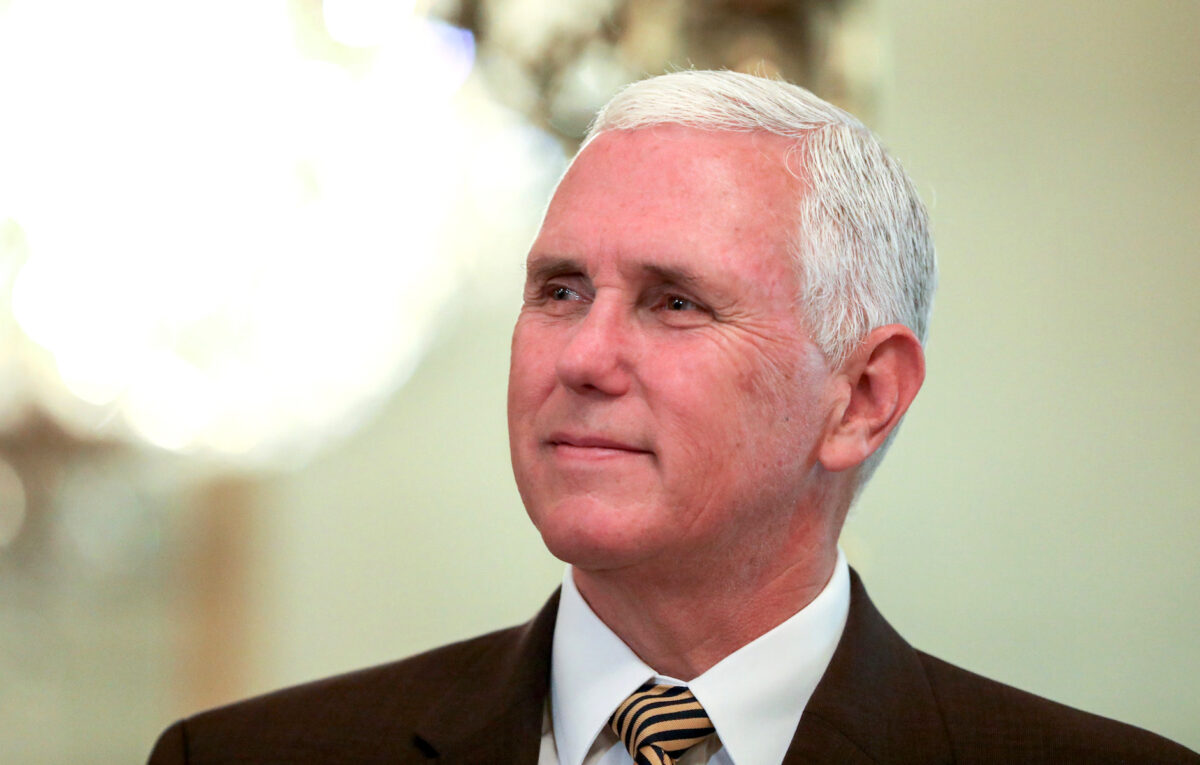 In an interview with CBS Evening News aired late Wednesday, host Norah O’Donnell asked Pence: “Everybody who’s related to one of those soldiers stationed in the Middle East is worried. Are we safer now?”

“I believe we are safer today than before President Trump ordered our military to take out Qassem Soleimani,” Pence replied. “This is a man [Soleimani] who’s been leading a terrorist state-sponsored organization in the region, sowing violence. What President Trump, our commander-in-chief demonstrated was—we have a president who’s also willing to use American military might to protect American lives.”

Soleimani was killed early Jan. 2 by a U.S. airstrike near Baghdad International Airport. The Pentagon confirmed that the strike was ordered by President Donald Trump.

Soleimani, 62, is considered the architect behind the Iranian regime’s foreign influence activities in the Middle East as head of the Quds Force, an elite unit within Iran’s Islamic Revolutionary Guards Corps (IRGC) that is tasked with Iran’s extra-territorial military operations including activities to expand Iranian influence in Syria and rocket attacks on Israel. The United States designated the IRGC as a terrorist group in early 2019.

The Pentagon said in a statement that Soleimani was “actively developing plans to attack American diplomats and service members in Iraq and throughout the region,” and that he and the Quds Force “were responsible for the deaths of hundreds of American and coalition service members and the wounding of thousands more.”

“One might say that taking out Soleimani is like taking a baseball bat to a hornet’s nest and those hornets are Iranian proxies. Proxy groups. Are you convinced that they won’t come after Americans?” she asked.

“The challenge we face now is that Qassem Soleimani was, in fact, the primary leader of those Iranian-sponsored militias across northern Iran and their influence in Syria as well, but we’re sending a very clear message as we did with those five airstrikes to militia bases that we will not tolerate violence,” he responded.

“But he didn’t act alone, as you know. And he acted with the blessing of the Ayatollah? The supreme leader?” O’Donnell asked.

“There’s no question,” Pence said. “And frankly, we’re receiving some encouraging intelligence that Iran is sending messages to those very same militias not to move against American targets or civilians, and we hope that that message continues to echo.”

On Tuesday, just a day prior to Pence’s remarks on CBS, Iran fired a barrage of missiles at two Iraqi military bases that host American forces in an apparent response to the killing of Soleimani. The attack did not result in any casualties.

“We do not seek escalation or war, but will defend ourselves against any aggression,” Zarif wrote on Twitter.

Following the attack, Trump said in a televised address from the White House that the United States would respond swiftly and impose “additional punishing economic sanctions” on Iran, adding that “these powerful sanctions will remain until Iran changes its behavior.”

According to the president, Iran’s attacks didn’t harm any Americans because of “precautions taken, the dispersal of forces, and an early warning system that worked very well.”

Trump noted that the United States seeks peace. “To the people and leaders of Iran: We want you to have a future and a great future—one that you deserve, one of prosperity at home, and harmony with the nations of the world. The United States is ready to embrace peace with all who seek it,” he said.

The president also called on NATO allies to become more involved in the Middle East.

A NATO release noted that Trump spoke with NATO Secretary-General Jens Stoltenberg over the phone about the current situation in the Middle East after the latest Iran missile attack. Both Trump and Stoltenberg concurred that “NATO could contribute more to regional stability and the fight against international terrorism.

According to the United States, Soleimani was responsible for orchestrating attacks on coalition bases in Iraq over the past several months prior to his death. The attacks included one aimed at the Kirkuk military base in northern Iraq on Dec. 27 that killed an American and wounded several American and Iraqi troops. Soleimani also approved the attacks on the U.S. Embassy in Baghdad that took place on New Year’s Eve, the Pentagon said.

Trump said during his speech on Wednesday that the money Iran received as part of the Iran nuclear deal secured by the Obama administration in 2015 was used to build the missiles that Iran fired at U.S. forces in Iraq on Tuesday.

“Iran’s hostilities substantially increased after the foolish Iran nuclear deal was signed in 2013, and they were given $150 billion, not to mention $1.8 billion in cash,” Trump said. “Instead of saying ‘thank you’ to the United States, they chanted ‘death to America.’”

“Then, Iran went on a terror spree, funded by the money from the deal, and created hell in Yemen, Syria, Lebanon, Afghanistan, and Iraq. The missiles fired last night at us and our allies were paid for with the funds made available by the last administration,” Trump added. “The regime also greatly tightened the reins on their own country, even recently killing 1,500 people at the many protests that are taking place all throughout Iran.”

Trump called on the countries that signed up to the deal—United Kingdom, Germany, France, Russia, and China—to find an alternative and “work together toward making a deal with Iran that makes the world a safer and more peaceful place.”

“We must also make a deal that allows Iran to thrive and prosper, and take advantage of its enormous untapped potential. Iran can be a great country,” Trump said.

Tensions with Iran began to escalate after Trump in May 2018 pulled the United States out of the multinational nuclear deal. Trump also signed an Executive Order to reimpose tight sanctions on Iran that was previously lifted as a part of the deal, commonly referred to as the Iran nuclear deal. Trump had long criticized the deal as a failure.

Read More
Trump Withdraws From Iran Deal, Orders Reimposing ‘Highest Level’ Sanctions
Why the US Pulled out of the Iran Nuclear Deal

The sanctions crippled Iran’s economy and contributed to widespread protests in the country.

The sanctions were imposed in efforts to force the Islamic regime to change a plethora of activities the Trump administration found unacceptable. At the time, the Trump administration demanded that Iran stop not only its nuclear technology development, but also its ballistic missile program, support for terrorists and militias in the region, and other destabilizing activities.

Ivan Pentchoukov contributed to this report.