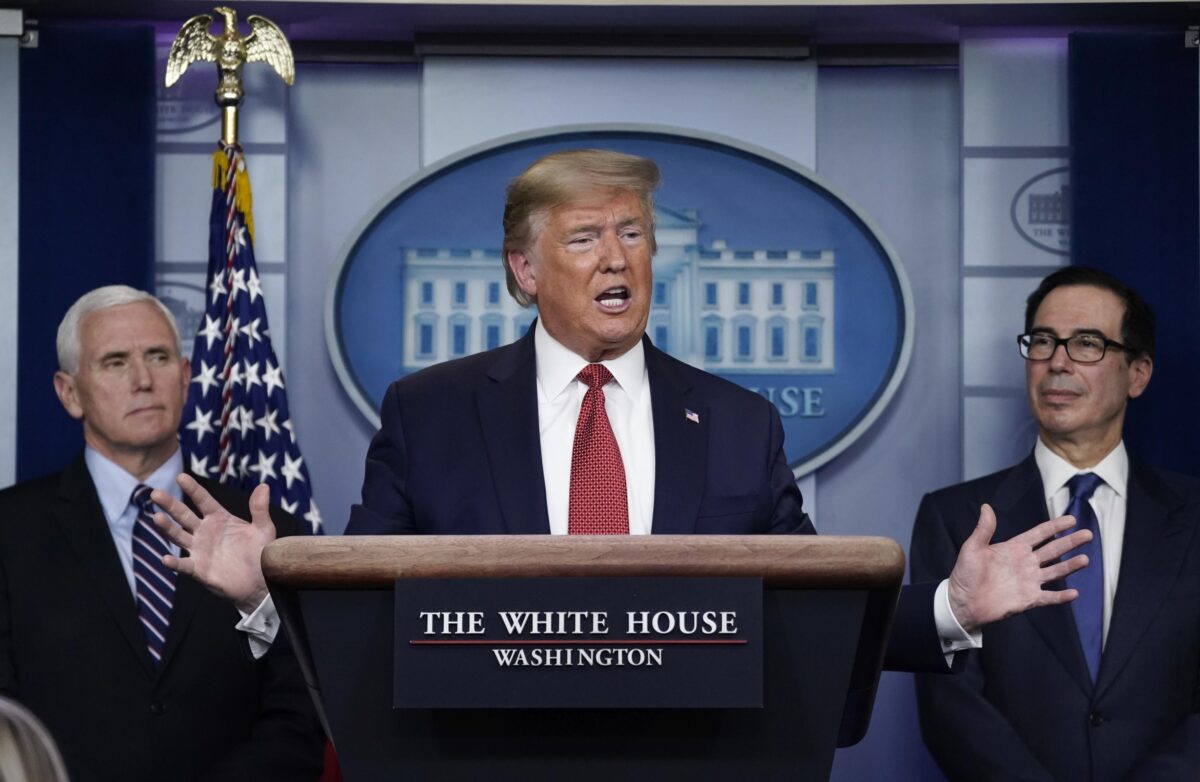 Cable and network broadcasters have started to cut away from President Donald Trump’s daily briefings on the CCP virus epidemic, despite their apparent popularity with Americans.

ABC, CBS, and NBC all covered Trump at the beginning of Monday’s briefing, which began about 6:10 p.m. ET. After 20 minutes, they switched to the network evening newscasts, never to return to Trump. The president spoke until shortly after 8 p.m.

Trump has been filling the public in on the government’s steps to counter the CCP virus, also known as the novel coronavirus, which broke out in the central Chinese city of Wuhan around November and was allowed to spread around the world due to the coverup by the Chinese Communist Party (CCP).

The cable news networks have given Trump blanket coverage for his briefings, but CNN cut away on March 23 at around 7:20 p.m. MSNBC followed within five minutes.

“If the White House wants to ask for time on the network, they should make an official request. Otherwise we will make our own editorial decisions,” CNN commented on its decision.

MSNBC, through a spokesperson, said that “we cut away because the information no longer appeared to be valuable to the important ongoing discussion around public health.”

The network’s top host, Rachel Maddow, had said on the evening of March 20 that television networks should no longer show Trump live. She cited examples of what she called false or misleading statements the president had made in past briefings.

“All of us should stop broadcasting it, honestly,” she said. “It’s going to cost lives.”

Conservative political commentator Bill Whittle called the broadcasters’ decisions “an indication that the president is doing a pretty good job.”

In his view, the media are tuning out because airing the briefings unedited shows Trump acting counter to a narrative pushed by a number of media outlets that he’s incompetent and tyrannical.

“Why on earth would a news agency carry the president’s daily address, buttressed by any number of scientific experts, on the daily progress of this worldwide pandemic?” he said jokingly in a March 26 video posted on his YouTube channel.

“Why on earth would you want that live? Why can’t we just sent cameras there so that we can edit out the parts that we don’t like, edit together the things that were actually said in such a way as to make him look like an idiot or a tyrant and then we can re-control the media, rather re-control the story, re-control the narrative. When you hear people saying that President Trump should not be giving the press conferences live, that’s all the evidence you need that he’s doing a good job.”

Trump’s briefings have had droves of Americans tuning in, nearly tripling ratings for that time slot.

Fox News, CNN, and MSNBC attracted 8.28 million viewers for Trump’s March 20 briefing, with nearly half of them watching Fox. The audience for those networks a year earlier was 2.82 million, according to ratings agency Nielsen.

The March 23 briefing had 12.2 million viewers, with Fox capturing more than half, The New York Post reported.

Meanwhile, Trump’s approval ratings have continued to climb. A Gallup poll had him at 49 percent on March 22, the best of his presidency so far by the pollster, which also reported that 60 percent of Americans approved of his handling of the virus.

On the virus response, “nearly all Republicans” (93 percent) approved of Trump and almost a third of Democrats (29 percent) did too.

“Democrats’ approval on this measure well exceeds their overall 13% rating for Trump in the same poll,” Gallup said.

The epidemic pushed out much of the focus previously on the 2020 presidential elections, including the Democratic primary, now reduced to two contenders—former Vice President Joe Biden and Sen. Bernie Sanders (I-Vt.).

The virus has forced both of the candidates to cease much of their campaign activities. Sanders held a live online town hall on the outbreak on March 24. By the afternoon of March 26, the video had attracted less than 80,000 views on Sanders’s official YouTube channel and nearly 800,000 on Facebook. Biden held a virtual briefing on the virus’s impact on young Americans on March 25. The video had some 10,000 views on his YouTube channel and less than 200,000 on his Facebook by the afternoon of March 26.