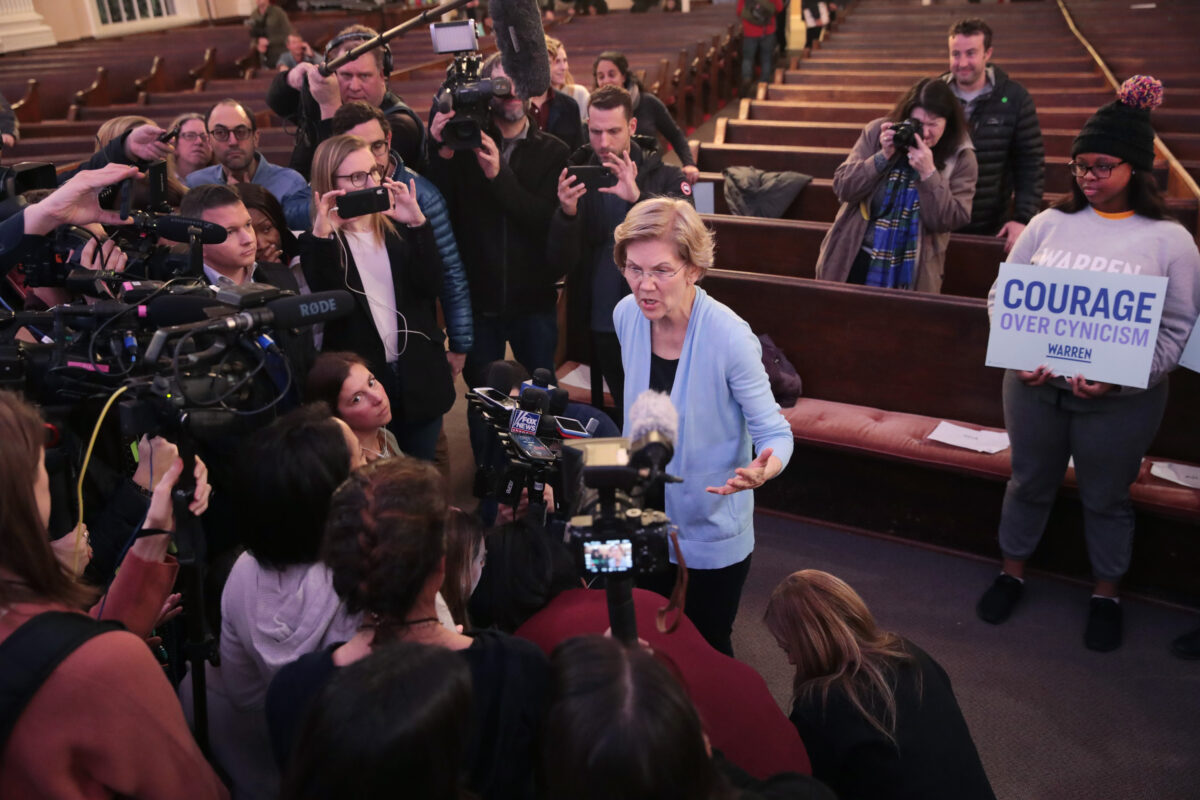 Elizabeth Warren has released a new plan to boost America’s small businesses, calling them “the heart of our economy,” and vowing to give them a leg up in their competitive struggle against powerful corporate rivals that she claims have skewed the playing field through lobbying and monopolistic practices.

Now polling in fourth place among the Democrat field of 2020 White House hopefuls, the Massachusetts Senator said she would “fight tooth-and-nail against government favors that help big businesses insulate themselves from competition or get special advantages compared to their smaller competitors.”

“I want small businesses to be able to compete on a level playing field,” Warren said, vowing to facilitate access to credit, overcome regulatory burden, and “unleash the full purchasing power of the federal government to support small businesses.”

Warren, in fleshing out her plan, lambasts what she argues is the undue influence of big business on politics.

“Part of the problem for small businesses is Washington,” she said. “A lot of Washington politicians claim they are ‘pro-business.’ What that often means, though, is that they’re pro-big business, and they’re willing to go to bat for every loophole, every tax break, and every other special favor that giant corporations want.”

She has criticized what she calls “incredible market concentration across our economy” and vowed to tackle it by pressing for stronger anti-trust enforcement and “breaking up Big Tech.”

“The basic view that big business is pulling the strings in Washington is one of the major myths of our time,” Cohen wrote in his book Big Business: A Love Letter to an American Anti-Hero, an excerpt of which was published in Foreign Policy.

“We love to hate the 800-pound gorilla,” his book synopsis reads on Google Books. A 2016 Gallup poll shows only 18 percent of people surveyed have “a great deal” or “quite a lot” of confidence in big business.

But while corporate confidence is at an all-time low, Cohen argues the data “does not support the view that big business is the dominant force shaping the U.S. government today.”

“If corporations have such amazing influence over federal policy, why are they spending only $3 billion or $4 billion on lobbying when they could be investing at a more fervent pace and shifting around the allocation of much, much more government money? Well, corporations aren’t actually so much in control,” he said, noting by comparison that corporations spend some $200 billion a year on advertising, suggesting that businesses would instead invest this money in lobbying if it brought significant results.

“A systematic study shows that business lobbying does not increase the chance of favorable legislation being passed for that business, nor do those businesses receive more government contracts; contributions to political action committees are ineffective too,” Cohen claims.

One of the points of Warren’s plan is to set up a Small Business Equity Fund that would provide $7 billion in grants to minority entrepreneurs, with the aim of creating 100,000 new minority-owned businesses.

“My administration will spread SBIR awards across a greater variety of small businesses and focus especially on increasing the diversity of awardees,” she said, arguing that under the current system, a large proportion of funds goes to repeat awardees “instead of opening the door to new entrants.”

She would also funnel half a billion dollars a year over the next decade to entrepreneurs in the sustainable farming and food system sectors, and require the Farm Credit System to provide more funding to “new and diverse farmers.”

Warren’s plan calls for measures to support community banks and credit unions that she calls “the financial lifeblood of many small businesses,” while expanding support for the Community Development Financial Institutions (CDFIs) that invest in areas that are underserved by traditional lenders.

Other measures she promises to introduce are reducing the regulatory burden on small businesses, including by expanding so-called “one-stop shops” that provide information to entrepreneurs on issues like registration and compliance.