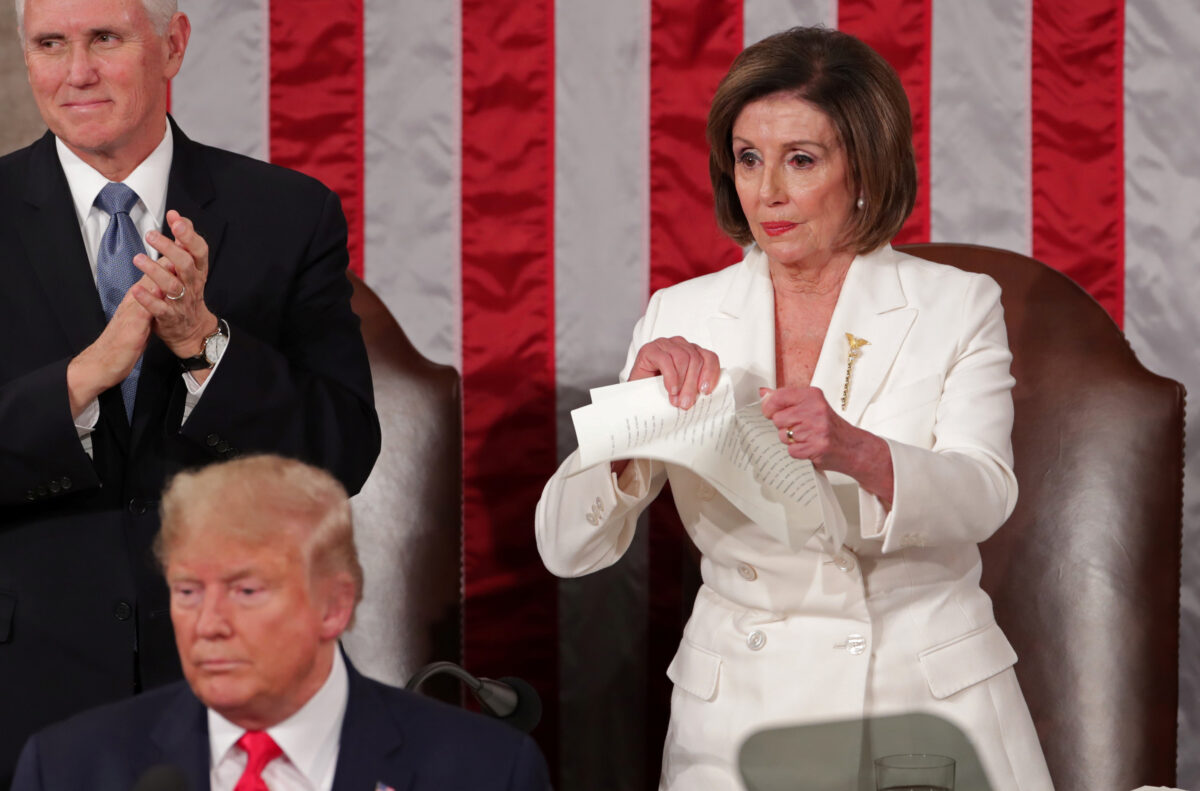 House Speaker Nancy Pelosi (D-Calif.) said she ripped President Donald Trump’s State of the Union address earlier this month to get the media’s attention because “we have very little press” on a number of issues that she feels are important to Americans.

“I had no intention of doing that when we went into the State of the Union,” she said during a Saturday interview. But when she read the speech, she “made a nitch on a couple of pages, thinking I ought to remember what’s on this page, on this page,” Pelosi remarked.

“Then I realized that almost every page had something in it that was objectionable. So it wasn’t a planned thing,” the House speaker told CNN.

Pelosi said that the media hasn’t focused on legislative items including minimum wage, gun violence protection, children’s issues, and a number of other issues. “The list goes on,” she said.

“We have very little press on it.  And it seems if you want to get press, you have to get attention. I thought, well, let’s get attention on the fact that what he said here today was not true,” Pelosi said in the interview.

Trump delivered his address just one day before he was acquitted in the Senate on two articles of impeachment—abuse of power and obstruction of Congress—following a monthslong inquiry in the House of Representatives. In September, Pelosi and House Intelligence Committee Chairman Adam Schiff (D-Calif.) announced the inquiry after a report from the Wall Street Journal detailed a whistleblower tip about Trump’s July 25 phone call with Ukraine’s president.

Her move to tear the speech drew widespread condemnation from Republicans as well as Trump administration officials. Her rival, House Minority Leader Kevin McCarthy (R-Calif.) claimed she had “no right to destroy this document.” It was later confirmed to be a copy of the speech.

“Whether she likes it or not, these great American stories will be remembered by history, not erased by the speaker,” he said on the floor of the House a day after the speech.

In the interview, the House speaker suggested that Democrats need to unify behind a 2020 candidate to ensure that Trump doesn’t win a second term in office.

“We have to have our own vision for the future, but everybody knows that we must be unified in making sure that he doesn’t have a second term,” Pelosi told the network. She hasn’t endorsed a candidate but added she believes any of the candidates would be a better option.