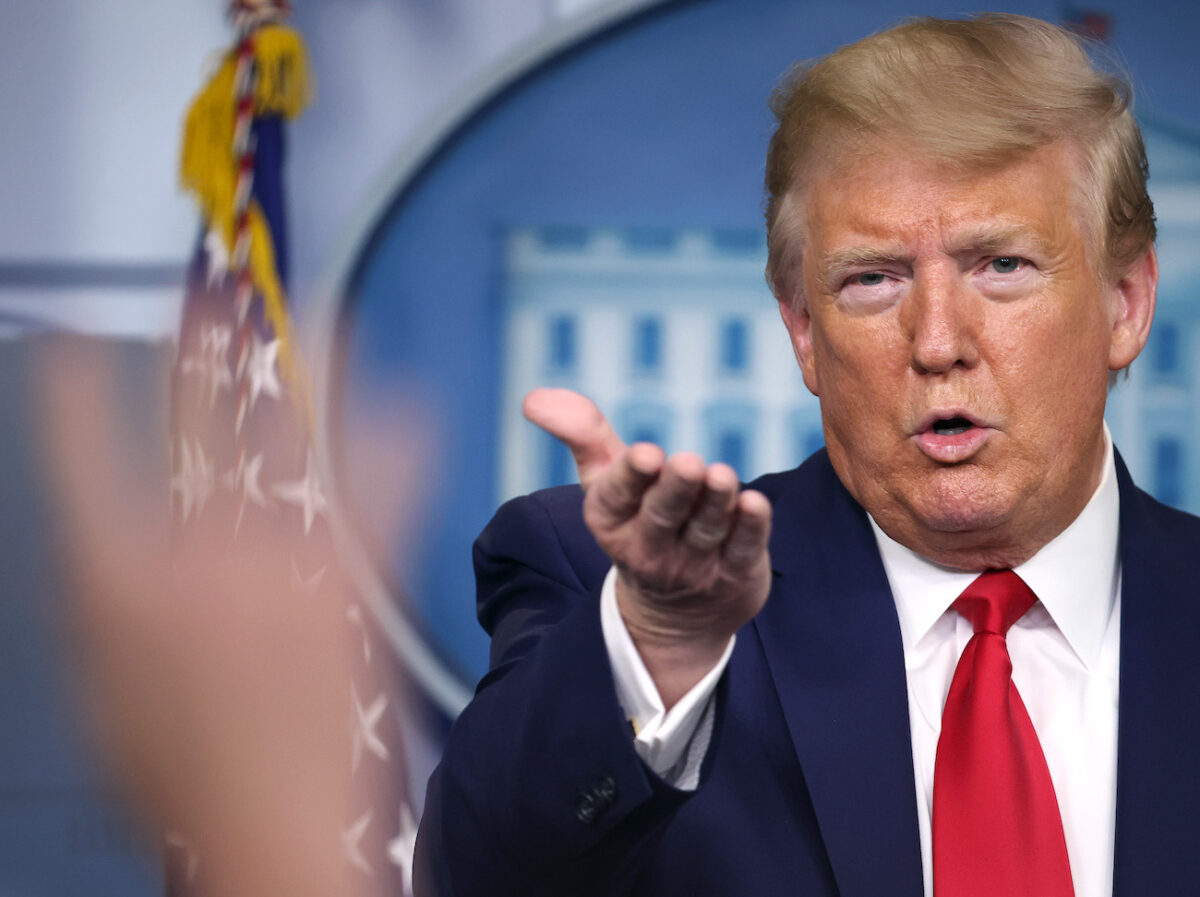 On Monday at a White House press briefing on the CCP virus, President Donald Trump asked a Chinese reporter from the pro-Beijing television network, Hong Kong Phoenix TV, whether she was working “for China.”

“Who are you working for, China?” Trump asked the reporter.

“Who owns that, China?” the president asked. “Is it owned by the state?”

“No, is it owned by the state?” Trump said, appearing to refer to the Chinese Communist Party (CCP).

“No, it’s not, it’s a privately owned company,” the reporter said.

“Okay, good,” Trump replied and continued to respond to the reporter’s original question.

Phoenix TV is based in Hong Kong, where media have the legal right to operate independently of Chinese censorship. However, the station has long been known as a de-facto mouthpiece for Beijing—and specifically, a faction within the CCP loyal to former leader Jiang Zemin, who was the party boss from 1989 to 2002.

The television station presents itself as an independent voice, concealing its pro-Beijing agenda by occasionally reporting on topics taboo in mainland China, such as food safety scandals. Its founder and CEO, Liu Changle, was a former People’s Liberation Army (PLA) propaganda officer. He later worked at the Communist Party’s official radio station.

Since Liu founded Phoenix TV in 1996, the broadcaster has consistently carried out the agenda of former leader Jiang, including aiding in Jiang’s propaganda campaign to smear Falun Gong and turn public opinion against the group. Falun Gong is a spiritual meditation practice that has since grown in popularity to be practiced worldwide since its introduction to the public in 1992. The Epoch Times has identified multiple television segments aired by Phoenix since 1999 that defame Falun Gong.

China expert Sarah Cook, of the Freedom House human-rights group, said in 2017 U.S. congressional testimony (pdf) that Phoenix TV is “an example of a Chinese propaganda outlet not directly owned by the Beijing government.” At the time of Cook’s statements, the Chinese state broadcaster, CCTV, had a 10-percent stake in Phoenix.

Liu is also known to be a close friend to Bo Xilai, a core member of Jiang’s faction and the former Chongqing party chief, who dramatically fell from power in 2012. In 2011 Liu brought a team from Phoenix TV to Chongqing to give Bo positive media coverage.

During the 2014 Umbrella Movement, the pro-democracy protests in Hong Kong that dominated headlines around the world, Phoenix TV portrayed the protesters as meddlers who intentionally clashed with police and caused disruption to the city.

When initially picked by Trump to ask a question, the reporter, Youyou Wang, first noted how the CCP had provided medical supplies to the United States.

Wang said that there were “multiple flights coming from China full of medical supplies” last week, where companies such as Huawei and Alibaba have been donating some “1.5 million N95 masks … medical gloves,” and “much more medical supplies” to the United States.

“Sounds like a statement more than a question,” Trump interjected.

“So are you personally working directly with China on medical supplies and also fighting with the virus?” the reporter asked Trump. “Are you cooperating with China?” she later repeated.

The president did not address the situation with the CCP virus directly but responded that the United States and China have just kickstarted a “phase one” trade deal that the two countries reached in January.

The trade deal had gone into effect several days ago, Trump noted earlier in the conference. “As you know, as of April 1, the China trade deal, $250 billion—they purchased $250 billion from us, if not more,” he said. Trump added that about $40-50 billion is expected to be spent on agricultural products, which he said: “should have a huge impact on our farmers.”

“China’s never spent money in our country,” he added. “We spent money; we had a deficit, a trade deficit with China for years of $500 billion, $400 billion. We had the biggest trade deficits in the history of the world with China. Now China’s going to spend a lot—has agreed to spend $250 billion, many billions of dollars in our country. Much of it going to farmers and manufacturers. So I’ll let you know. I hope they’re going to honor the deal. We’ll find out.”

“It’s time for them [China] to help us,” Trump later said. “It’s time right now for China to help us. And hopefully, they do, and if they don’t, then that’s okay too. But we signed a deal, and it was signed with great goodwill and spirit. And it’s time that our farmers benefited and that our manufacturers benefit.”

The deal maintained 25 percent of import taxes on about $250 billion of China-made industrial goods and components used by U.S. manufacturers.

Under the deal, the Chinese regime committed to buying over the next two years at least an additional $200 billion of U.S. goods and services, over a baseline of $186 billion in purchases in 2017. This includes purchases of manufactured goods, such as aircraft, pharmaceuticals, and industrial machinery, which will increase by $77.7 billion over the two years.

The deal includes an agreement for Beijing to purchase an additional $32 billion of farm goods over the next two years, including soybeans, cotton, grains, and meat. It also pledged to strive to buy an additional $5 billion of agricultural products annually. Also, the regime agreed to allow more market access to U.S. meat, poultry, dairy, pet food, and agriculture biotechnology.

Zhang Xianyi, Sunny Chao and Cathy He contributed to this report