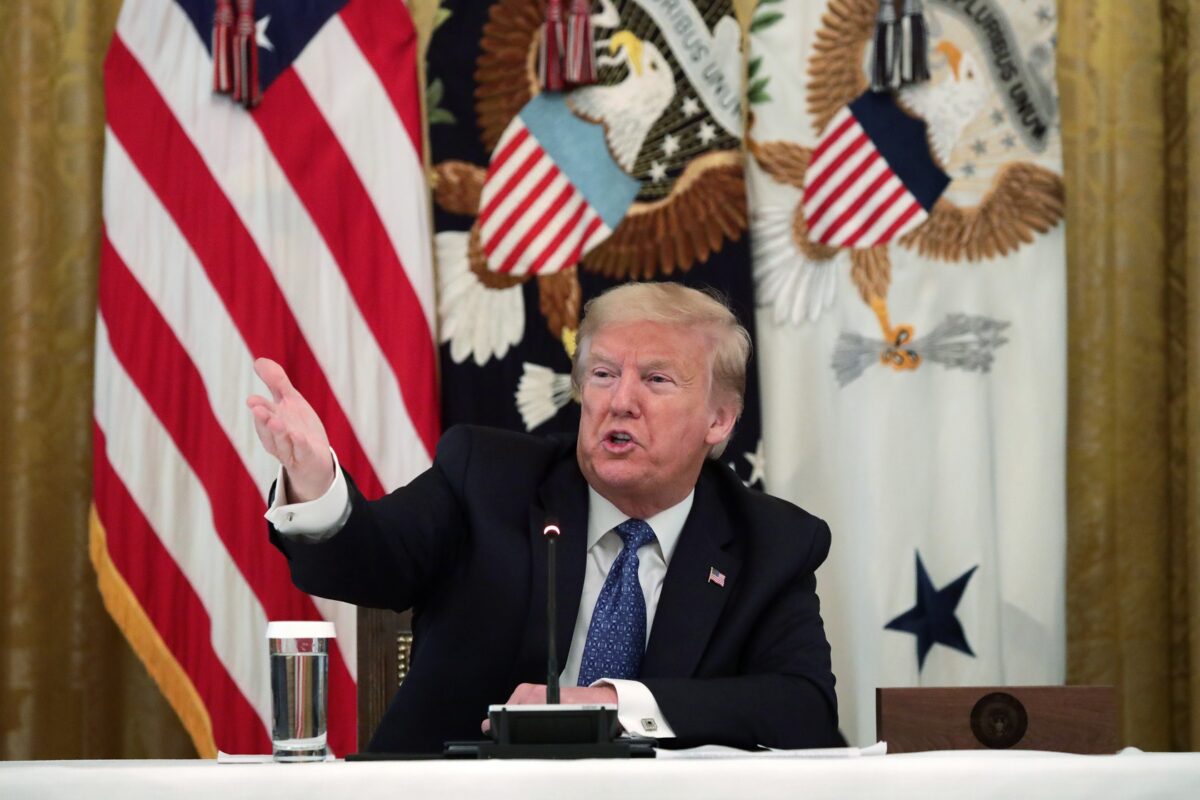 President Donald Trump signed an executive order last week aimed at boosting the pandemic-weakened economy and strengthening basic due process protections for Americans involved in agency regulatory proceedings as part of what the administration calls the Regulatory Bill of Rights.

“To protect our people and defeat the virus, we must also defend the health of our nation’s economy,” the president said at a cabinet meeting May 19. “To achieve this goal, we’ve slashed red tape and bureaucracy and unleashed the largest industrial mobilization since World War Two.”

The document, known as Executive Order 13924, instructs federal agencies to look at regulatory actions they could take to encourage growth in the economy. The order instructs “federal agencies to use any and all authority to waive, suspend, and eliminate unnecessary regulations that impede economic recovery.”

“Just as we continue to battle COVID-19 itself, so too must we now join together to overcome the effects the virus has had on our economy,” the order states.

The libertarian Cato Institute advocated a Citizens’ Regulatory Bill of Rights back in 1995. It called for the federal government to, among other things, provide people with written notice of the legal basis for an inspection or search when one is conducted. Years later President Trump moved forward with his own attempt at combating the so-called administrative state, as his administration early on made a focus of slashing regulations.

Critics say officials in the administrative state are unaccountable to voters and allow unelected bureaucrats to usurp the functions of the executive, legislative, and judicial branches. Congress, they say, is supposed to make the laws of the land, but lawmakers have steadily ceded that body’s constitutional powers to the administrative state, to the overall detriment of society.

Two months before the president unveiled his order, the Sacramento, California-based Pacific Legal Foundation (PLF), a nonprofit and public interest law firm, submitted a 46-page comment to the Office of Management and Budget (OMB). The document offered examples from PLF’s portfolio of public interest litigation regarding regulatory due process violations and recommending due process principles that included every one of the 10 regulatory reform-related items the president listed.

Among the complaints against regulators raised by PLF are that agencies fail to provide notice of the scope or content of investigations, use biased and unreliable evidence, and withhold exculpatory evidence, as they presume the other side’s guilt instead of bearing the burden of proof.

Other complaints are that agencies threaten excessive penalties to force people into settlements, that cases are tried before biased agency adjudicators instead of independent courts, and that rules are issued by mere agency employees, rather than by properly appointed officers overseen by the elected president.

“While we are excited that the administration took our recommendations seriously, it now falls on the individual agencies and the OMB to change their current practices to conform to the principles the president has reaffirmed,” said Todd Gaziano, director of the Center for the Separation of Powers at PLF, in a statement.

“PLF will continue to fight until the aspirational goals of the Regulatory Bill of Rights become a reality.”

A new report released by the group, The Regulatory State’s Due Process Deficits, relates the stories of nine PLF clients who faced shortfalls in their due process rights from regulatory agency investigations and other actions.

“While we are excited that the administration took our recommendations seriously, it now falls on the individual agencies and the OMB to change their current practices to conform to the principles the president has reaffirmed,” Gaziano said. “PLF will continue to fight until the aspirational goals of the Regulatory Bill of Rights become a reality.”

The president explained the purpose of his order at the cabinet meeting.

“I’m directing agencies to review the hundreds of regulations we’ve already suspended in response to the virus and make these suspensions permanent where possible,” Trump said.

“I’m also instructing agencies to use the emergency authorities to speed up regulation cuts or new rules that will create jobs and prosperity and get rid of unnecessary rules and regulations.”

“We had cases where it would take 20 years to build a highway. You’d have to go through various agencies to get the same permit. I lived with it in the private sector, so I know it better than anybody, where you’d go years and years and years to build a simple roadway or a simple building, and it would end up costing an absolute fortune — many, many times what it should cost.”

“Freeing our economy from unnecessary government regulation will play a critical role in speeding up our nation’s recovery from COVID-19,” she said.

Lisa Gilbert, vice president of legislative affairs at the left-leaning Public Citizen, a watchdog group, gave the order a thumbs-down, saying it was vague.

“It feels like a blank check,” she said. “It’s encouraging agencies to do sort of an internal dive and decide if they can enforce things. I think they are formalizing what’s been an informal mandate.”