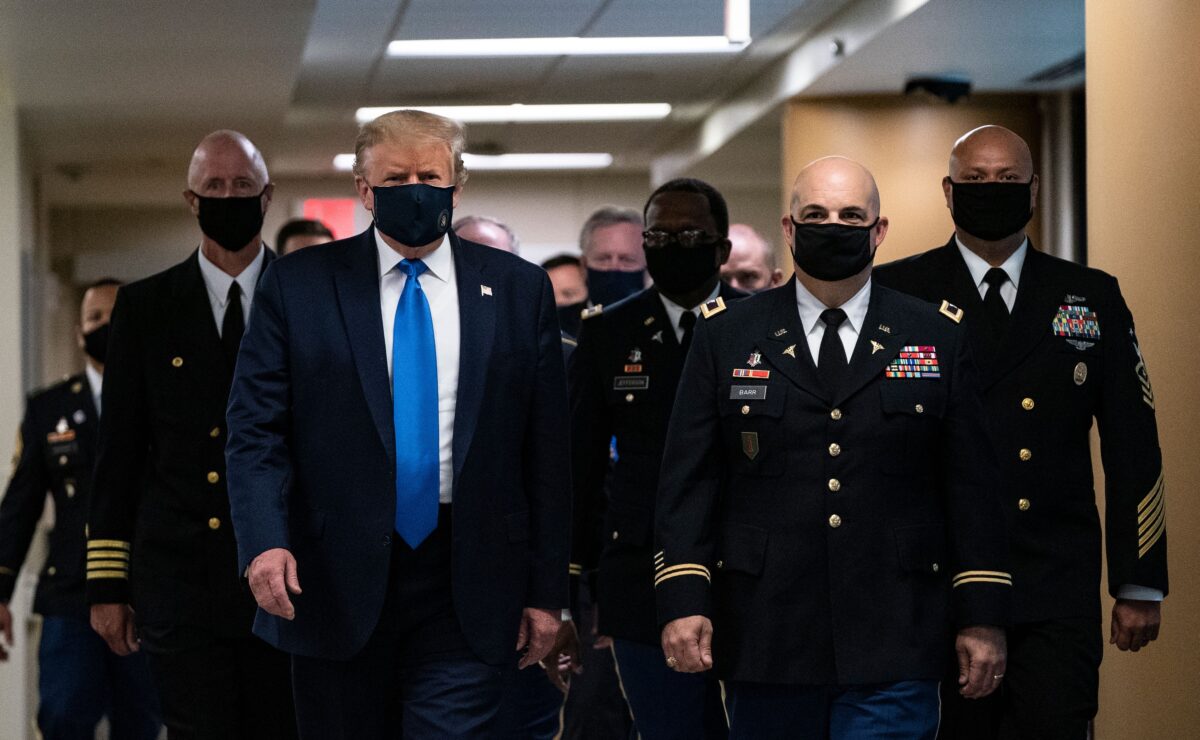 President Donald Trump wore a mask during a visit to the Walter Reed National Military Medical Center in Maryland on Saturday.

The president was seen walking in the hallway of the military hospital with a navy blue face covering. Staffers from the White House and the hospital were also wearing masks.

He visited Walter Reed to meet with wounded soldiers as well as health care professionals caring for patients with COVID-19, the disease caused by the CCP (Chinese Communist Party) virus.

He indicated that he may wear a mask when departing from the South Lawn of the White House.

“I’ll probably have a mask,” he told reporters. “I think when you’re in a hospital, especially in that particular setting, where you’re talking to a lot of soldiers and people that, in some cases, just got off the operating tables, I think it’s a great thing to wear a mask.”

“I’ve never been against masks, but I do believe they have a time and a place,” he added.

According to the medical center’s policy, visitors are expected to wear a cloth face covering over their nose and mouth upon entering and while moving about the facility or waiting rooms and when they are not able to maintain six feet of social distancing.

The president called the wounded soldiers being treated at Walter Reed “heroes” and the frontline medical staff “warriors.”

“So we’re going to Walter Reed Hospital, and we’re going to be seeing soldiers—our great heroes, our wounded, and some badly wounded. And they’re incredibly brave and great people.

“And we’re going to see also the warriors on the frontline of COVID[-19], and quite a few of them.” he said. “We’re going to spend some good time with them, and I look forward to doing it. And it’ll be my honor to be there.”

The only time Trump has been known to wear a mask was during a private part of a tour of a Ford plant in Michigan.

Trump acknowledged earlier this month that it’s appropriate for people to wear mask if they’re in an indoor setting where people are in close proximity.

“I’m all for masks. I think masks are good,” Trump told Fox News Business, adding that he doesn’t necessarily support a nationwide mandate for Americans to wear masks. There are “many places in the country where people stay very long distance” from each other, Trump said.

He made the remarks after senior Republicans called on Americans to start wearing masks as infections being to rise again as lockdown measures across the country become less restrictive. Some health experts have said that the pandemic will persist for months.

The wearing of masks has become another political dividing line, with Republicans more resistant to implementing government policy for mask wearing than the Democrats, who prefer a top-down approach.

Jack Phillips and The Associated Press contributed to the report.