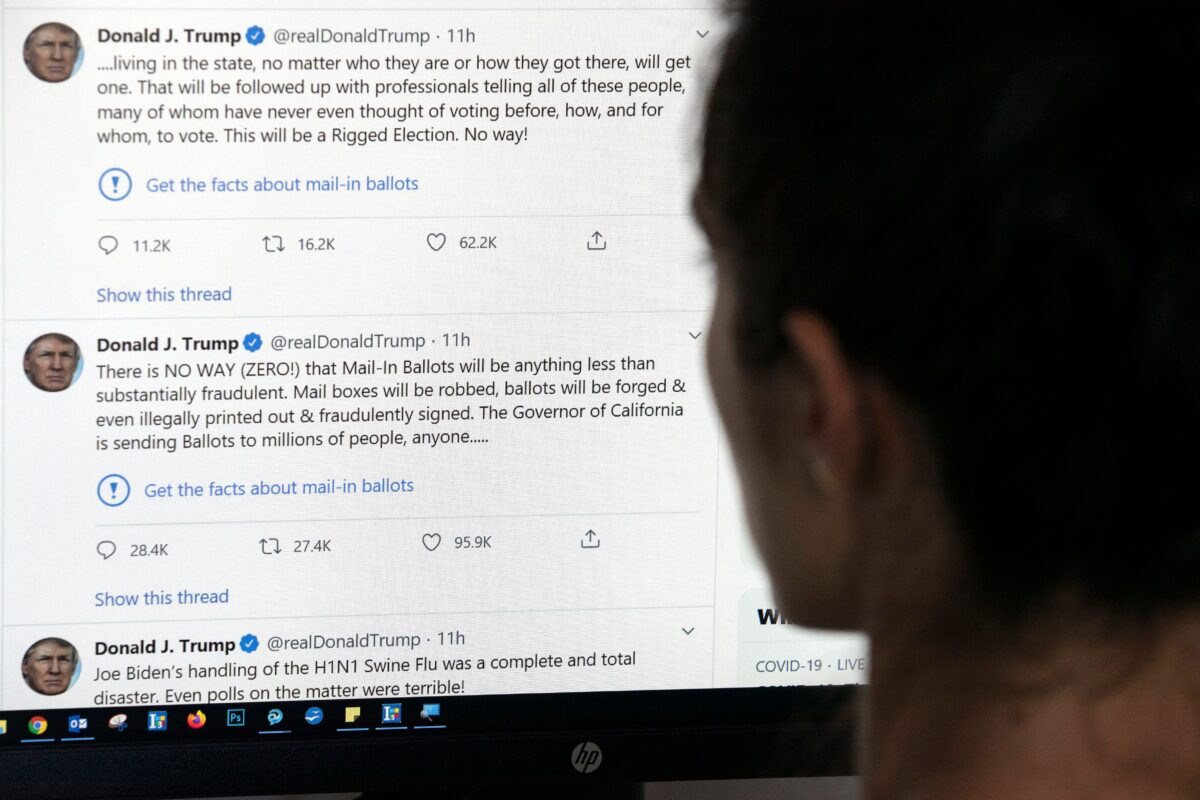 Twitter, in a first for the social media platform, has added a fact-checking label to posts by President Donald Trump, who responded by accusing the company of election interference.

The move has “dangerous” and “far-reaching implications,” and fairness and consistency will be hard to guarantee moving forward, social media experts told The Epoch Times.

On May 26, the president expressed concern in a Twitter post about mail-in ballots, saying that such a practice, if widespread, would lead to fraud and a “rigged election.” Twitter later added a warning label to the post that reads, “Get the facts about mail-in ballots.”

The label links to a Twitter article that is headlined, “Trump makes unsubstantiated claim that mail-in ballots will lead to voter fraud.”

The message under the headline reads, in part: “These claims are unsubstantiated, according to CNN, Washington Post, and others. Experts say mail-in ballots are very rarely linked to voter fraud.”

The article also includes three points under the title, “What you need to know.”

The fact-checking label is concerning since it sends people to a list of content that Twitter deems to be factual, such as certain media organizations, as well as posts from Twitter users who aren’t verified trusted sources, said Andrew Selepak, social media professor at the University of Florida.

“Twitter is essentially telling users who can and who cannot be trusted and labeling content from some users as untrustworthy,” Selepak told The Epoch Times. “Determining what is true and false … is what a content publisher would do—and not a social media platform.”

If deemed a publisher, Twitter may no longer be protected under Section 230 of the Communications Decency Act and therefore could be subject to government regulation, Selepak said.

Users should decide themselves what they believe, he said. If a platform makes that decision for them, that platform becomes “more similar to a publisher than serving a role as a public sphere.”

In a statement to media outlets on May 26, Twitter said that Trump’s posts about mail-in voting “contain potentially misleading information about voting processes and have been labeled to provide additional context.” Twitter noted that the post doesn’t violate its rules because “it does not directly try to dissuade people from voting.”

Twitter also pointed to a new policy that indicates it “may use these labels and warning messages to provide additional explanations or clarifications in situations where the risks of harm associated with a tweet are less severe but where people may still be confused or misled by the content.”

Twitter has “opened a can of worms,” according to Mark Grabowski, an associate professor specializing in cyber law and digital ethics at Adelphi University.

“I don’t want to see misinformation on social media but … how will Twitter ensure fairness and consistency?” Grabowski told The Epoch Times via email.

Grabowski pointed out that Twitter’s in-house fact-checking head, Yoel Roth, who holds the position “Head of Site Integrity,” has a history of politically charged posts.

“Will this new policy apply to other politicians? Which ones? Will all tweets be fact-checked or just some? Who will determine the veracity of a tweet?” he said.

“We always knew that Silicon Valley would pull out all the stops to obstruct and interfere with President Trump getting his message through to voters,” Parscale said.

“Partnering with the biased fake news media ‘fact-checkers’ is only a smokescreen Twitter is using to try to lend their obvious political tactics some false credibility. There are many reasons the Trump campaign pulled all our advertising from Twitter months ago, and their clear political bias is one of them.”