The UK government announced a new wave of government-funded research and development projects in the 5G technology to boost innovation in this sector and put Britain at the forefront.

“The new funding we are announcing today will help us pioneer new ways to seize the opportunities of 5G and bring tangible benefits for consumers and businesses across the country,” Minister for Digital Infrastructure, Matt Warman said, according to a UK government statement.

“We are helping innovative thinkers across Britain use their creativity to harness the power of 5G and boost economic productivity, cut pollution and congestion, and develop the next generation of entertainment,” Warman added.

The UK government unveiled that £200 million ($257 million) will be invested in the government’s testbeds and trials program that focuses on exploring new ways of applying 5G in industries ranging from defense through healthcare and self-driving trucks to entertainment that can stimulate business growth and productivity, according to the statement.

In addition, the projects will receive £30 million ($39 million) for devising new uses for 5G through open competition that will give way to unleash “British creativity,” the statement said.

Organizations match-funded by the government, ranging from large tech and telecoms companies to small and medium-sized businesses and local authorities, account for £16.4 million ($21 million) of this £30 million package, the statement said.

There are 17 British small or medium businesses involved in the projects and some of them drive forward the government initiative to develop the telecommunication supply chain in the UK, according to the statement.

One of the projects will be tested in a 5G testbed—a 5G test network designated for conducting rigorous testing that closely simulates the real world—which includes Samsung kit, marking the first time the South Korean telecommunication and electronics giant is participating in a UK-based 5G research and development project, according to the statement.

The UK government plans to add “a second round” of new 5G projects to this initiative in the fall, according to the statement.

Another project is to develop at the Nissan factory in the UK a self-driving truck leveraging 5G technology, said the statement. The project is led by British automotive companies and will link many small and medium businesses in one supply chain.

Paul Butler, Chief Executive of the North East Automotive Alliance, one of the project leaders said, “The 5G will uniquely enable the removal of the safety driver from the process, allowing remote teleoperations to overcome abnormal situations.”

“This project represents a major opportunity to support and accelerate economic growth” and “will encourage further private and public sector investment,” he added. 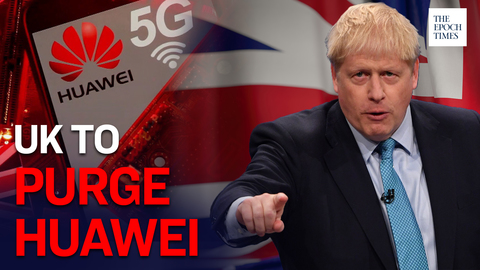 Earlier this month, the UK banned Chinese company Huawei, which is not considered a trusted vendor by the United States, from further input into the UK’s telecoms infrastructure by the end of 2020, and set a deadline of 2027 for the stripping out of its existing kit from the country’s 5G network.

The reversal has come amid fears of the potential for spying and sabotage on the part of the Chinese telecoms giant, which are alleged to be linked to the Chinese state.

Mary Clark contributed to this report.