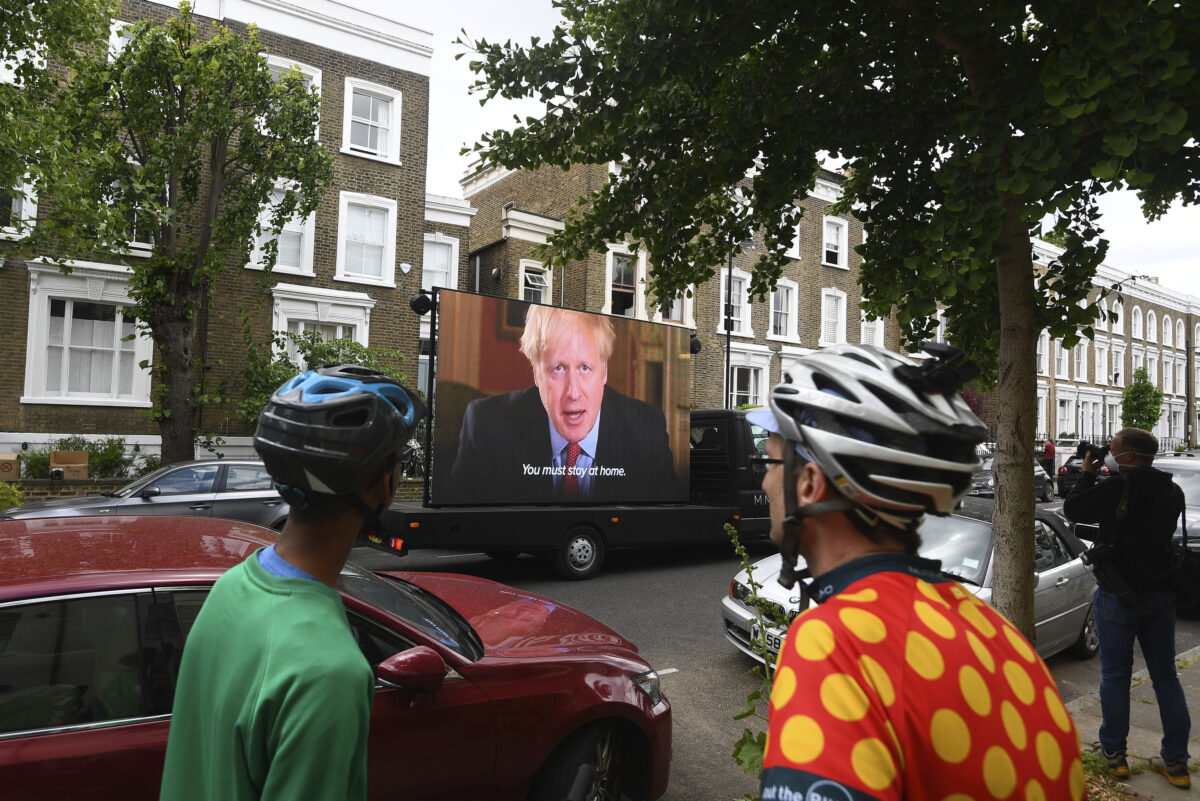 Political campaign group Led By Donkeys transport a screen showing a prerecorded video link of Britain’s Boris Johnson delivering a statement, outside the home of his senior aide Dominic c**mings, in London, UK, on May 24, 2020. (Victoria Jones/PA via AP)

LONDON—Prime Minister Boris Johnson said on Sunday he wouldn’t fire his chief aide for allegedly violating the national lockdown rules that he helped to create by driving the length of England to his parents’ house while he was infected with the CCP virus.

Defying a growing clamor from public and politicians, Johnson said Dominic Cummings had acted “responsibly, legally and with integrity” when he drove 250 miles from London to Durham, in northeast England, with his wife and son at the end of March.

Britain’s lockdown, which began March 23, stipulated that people should remain at their primary residence, leaving only for essential local errands and exercise. Anyone with the symptoms of CCP (Chinese Communist Party) virus, commonly known as novel coronavirus, was told to completely isolate themselves.

Cummings says he traveled to be near extended family because his wife was showing COVID-19 symptoms, he correctly thought he was also infected and he wanted to ensure that his 4-year-old son was looked after.

Johnson told a news conference that Cummings had “followed the instincts of every father and every parent.” He said Cummings, his wife, and son followed the rules by self-isolating for 14 days once they reached Durham.

But critics of the government expressed outrage that Cummings had broken strict rules that for two months have prevented Britons from visiting elderly relatives, comforting dying friends, or even attending the funerals of loved ones. The opposition Labour Party has called for an official investigation.

Labour leader Keir Starmer said Johnson’s defense of Cummings was “an insult to sacrifices made by the British people.”

“The prime minister’s actions have undermined confidence in his own public health message at this crucial time,” he said .

Former Labour lawmaker Helen Goodman, whose father died in a nursing home during the outbreak, said Cummings’s behavior was “repellent.”

Speaking inside the prime minister’s 10 Downing St. residence, Johnson said “I can totally get why people might feel so confused and … so offended by the idea that it was one thing for the people here and one thing for others.”

But he said Cummings’s “particular childcare needs” left him “no alternative” but to make the 250-mile trip.

Cummings is a key but contentious figure in Johnson’s administration. A self-styled political disrupter who disdains the media and civil service, he was one of the architects of the successful campaign to take Britain out of the European Union, and orchestrated the Conservatives’ decisive election victory in December.

The CCP virus cut a swath through the top ranks of Britain’s government in March and April, infecting people including Cummings, Health Secretary Matt Hancock, and Johnson himself, who has said that the medical staff at a London hospital saved his life.

Despite the government’s support for Cummings, several lawmakers from Johnson’s Conservative Party joined the opposition in calling for the aide to be sacked.

“Dominic Cummings has a track record of believing that the rules don’t apply to him and treating the scrutiny that should come to anyone in a position of authority with contempt,” tweeted Conservative lawmaker Damian Collins. “The government would be better without him.”

Another Tory legislator, Steve Baker, said Cummings must resign for not “abiding by the spirit, at least, of the slogans which he has enforced on the rest of the country.”

Johnson’s government is already facing criticism for its response to a pandemic that has hit Britain harder than any other European country. Britain’s official CCP virus death toll stands at 36,793, one of the highest in the world. Statistics that include suspected as well as confirmed virus cases put the toll well over 40,000.

The UK is gradually easing its lockdown, allowing more outdoor recreation and letting some shops and businesses reopen.

Johnson confirmed Sunday that primary schools can start reopening in June, though many parents and teachers worry that it isn’t yet safe to do so.

Johnson said the government was still aiming to have pupils in the first and final years of primary school back in classrooms on June 1, though he acknowledged that “may not be possible for all schools.”

Cummings is one of several senior UK officials to be accused of flouting the lockdown rules.

Epidemiologist Neil Ferguson stepped down as government scientific adviser earlier this month after a newspaper disclosed that his girlfriend had crossed London to stay with him during the lockdown. In April, Catherine Calderwood resigned as Scotland’s chief medical officer after twice traveling from Edinburgh to her second home.