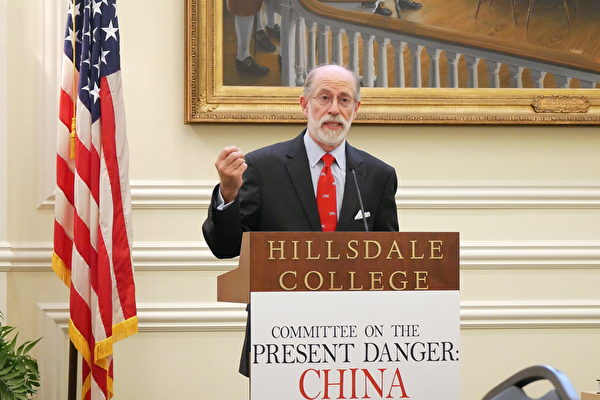 In response to the Chinese Communist Party (CCP) passing a National Security Law that threatens to “crush freedom” in Hong Kong, the Committee on the Present Danger: China (CPDC) put forward twelve recommendations to President Trump and the U.S. Congress on May 27.

Expecting the CCP to be emboldened by successfully taking away Hong Kong’s freedom to threaten freedom elsewhere, the recommendations seek “to defend the United States’ national interests, to protect our economic interests at home and abroad and to secure freedom.”

Included in the CPDC recommendations is a response to “organ genocide”: “A national effort should be made to identify and act to impede the CCP’s practice of organ genocide – the international marketing and implantation of organs involuntarily and often murderously removed from members of religious and ethnic minorities, political prisoners and others.”

Frank Gaffney, vice chairman of CPDC, told The Epoch Times that the United States should take the lead in stopping the CCP’s forced organ harvesting.

Gaffney praised the 2020 Annual Report of The U.S. Commission on International Religious Freedom: “The USCIRF’s report, as far as it goes, is further helpful confirmation of what is being done to people of faith in particular, and I believe to the Chinese people more generally, by this barbaric totalitarian regime in control of the Chinese Communist Party. The more Americans are aware of it, the more they will find offensive.”

The report states, “Human rights advocates and scientists presented evidence that the practice of harvesting organs from prisoners—many of whom are believed to be Falun Gong practitioners—continued on a significant scale.”

Gaffney also praised the report of the China Tribunal, which he said did “splendid work.”

In June 2019, the independent tribunal sitting in London concluded that forced organ harvesting has been committed for years throughout China on a significant scale. Adherents of the spiritual practice Falun Gong have been one of the main sources of organ supply, according to the tribunal.

Falun Gong is a mind and body practice based on the universal principles of truthfulness, compassion, and tolerance. In 1992 Falun Gong was introduced to the world in Changchun city in northeastern China and quickly gained popularity. The Chinese regime’s official data showed the number of those practicing Falun Gong exceeded the number of CCP party members.

On July 20, 1999, the CCP launched a campaign against Falun Gong. Over 21 years, an unknown number of Falun Gong practitioners have been arrested and disappeared, with their family members never hearing from them again. Many of these may be assumed to have had their organs harvested.

Freedom House reports that hundreds of thousands of adherents have been sentenced to labor camps and prison terms, making them the largest contingent of prisoners of conscience in China.

The 160-page long “Judgement” of the China Tribunal declares that the CCP’s campaign of forced organ harvesting against innocent victims is a “crime against humanity” constituting one of the world’s “worst atrocities committed” in modern times.

The Chair of China Tribunal, Sir Geoffrey Nice, led the prosecution of Slobodan Milošević, former President of Serbia, at the UN’s International Criminal Tribunal for the Former Yugoslavia.

Gaffney said documentation and investigation have fully confirmed the crimes of the CCP in conducting forced organ harvesting, and further investigation is not needed by the international community.

Notable investigations into organ harvesting in China include:

“This is not something that I think we need to continue to investigate or study or report on,” Gaffney said. “I think this is something that—whether it’s the international elements that are enabling this thing to operate, or whether it is technologies that are being used to facilitate it, or whether it is simply a matter of just exposing it much more aggressively—my own feeling is we ought to be doing all of that. Because this is a crime against humanity on an epic scale.”

He believes that the international community should take some actions to help stop it. “I think the U.S. government can play a leading role in that,” said Gaffney.

Asked about some of the collaboration between Chinese and Western pharmaceutical companies, and between medical institutes in clinical studies and doctor training, which serve as indirect assistance to the organ harvesting in China, Gaffney said we can “challenge and decry” it.

He said, “There are things that could be done to make this less. Hopefully [we can] save a lot of people ‘s lives in China, including Falun Gong and other people who are being brutalized for this purpose.”