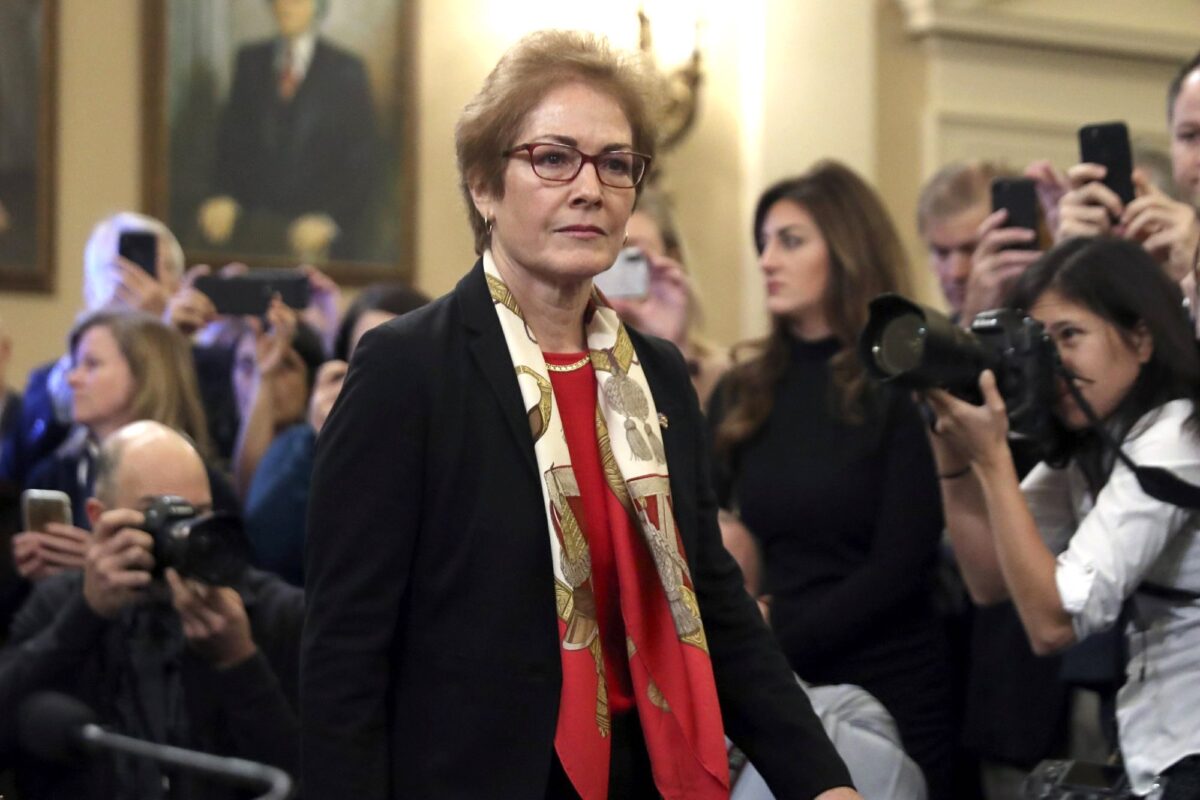 In a speech on March 5, Yovanovitch called for the firing of Ukraine’s special anti-corruption prosecutor, Nazar Kholodnytsky. Yovanovitch issued the demand just six weeks prior to Ukraine’s presidential election.

In March 2018, Kholodnytsky was accused of coaching the subjects of criminal investigations. The accusations stemmed from tapes of conversations in Kholodnytsky’s office recorded using a bug planted by the National Anti-corruption Bureau of Ukraine. By July 2018, an inquiry into the tapes concluded Kholodnytsky deserved a reprimand but should keep his job.

“Nobody who has been recorded coaching suspects on how to avoid corruption charges can be trusted to prosecute those very same cases,” Yovanovitch said. “Those responsible for corruption should be investigated, prosecuted, and if guilty, go to jail. And in order for that to happen, all of the elements of the anti-corruption architecture must be in place and must be working effectively.”

Kholodnytsky has argued that he did not commit wrongdoing and remained in his post after the election victory of President Volodymyr Zelensky on April 21. In response to Yovanovitch’s comments, Kholodnytsky said it was unacceptable for the ambassador to meddle in Ukraine’s internal affairs.

“You know, what the ambassador of another state allows herself is on her conscience. Interference in the internal affairs of another state is unacceptable. I will not comment on this statement; I will refrain from commenting for now,” Kholodnytsky told LB.ua at the time.

Yovanovitch testified on Nov. 15 before lawmakers conducting the Democrat-run impeachment inquiry. The impeachment probe is examining allegations that President Donald Trump sought to boost his 2020 reelection prospects by delaying military aid to Ukraine in order to force an investigation into former Vice President Joe Biden and his son, Hunter Biden.

Yovanovitch admitted that she had no first-hand knowledge of the events leading to the impeachment inquiry. On the day prior to her testimony, Ukraine’s foreign minister said he was never aware of a tie between the delay in military aid and the request for investigations.

While Yovanovitch did not offer any evidence for the allegation that Trump sought Ukraine’s help in the 2020 election, her appearance served as a reminder that U.S. officials actively meddled in Ukraine’s internal affairs even during the politically sensitive period of a presidential election.

Kholodnitsky was appointed on Nov. 30, 2018, by Viktor Shokin, Ukraine’s prosecutor general. Months later, Shokin was fired due to pressure from Joe Biden, who threatened to withhold $1 billion in U.S. loan guarantees unless the Ukrainian president at the time, Petro Poroshenko, removed Shokin.

At the time of his firing, Shokin was investigating Mykola Zlochevsky, the owner of Burisma Holdings, the Ukrainian gas giant which paid Hunter Biden tens of thousands of dollars a month to sit on its board of directors. Notably, Shokin’s prosecutors seized Zlochevsky’s assets on Feb. 2, 2016, just two weeks before Shokin was forced to resign.

Yovanovitch told lawmakers on Nov. 15 that she first became aware of Hunter Biden’s involvement with Burisma in the lead-up to her June 21, 2016, Senate confirmation hearing. She said the Obama-Biden administration included a question about Biden and Burisma in a binder of preparatory questions for the hearing. Yovanovitch said the suggested answer was to refer the matter to the vice president’s office.

Yovanovitch’s colleague, Deputy Assistant Secretary of State George Kent, told lawmakers that he inquired with the vice president’s office about the potential appearance of a conflict of interest regarding Biden’s position on the Burisma board, according to the transcript (pdf) released by the House Intelligence Committee. A representative from Biden’s office said the vice president’s capacity to deal with family issues was limited since his other son, Beau Biden, was battling cancer.

The episodes confirm that the Obama administration was aware of the potential conflict of interest but took no action to correct it.

Hunter Biden joined Burisma in April 2014, one or two weeks after British prosecutors seized $23 million in assets held in London by Zlochevsky. The asset freeze was celebrated weeks later at an international conference dedicated to the recovery of assets allegedly stolen by Ukrainian oligarchs and officials. Despite the celebrations, the case stalled for months as the Ukrainian prosecutor’s office slow-walked a request from London for additional evidence. In January 2015, a British judge dismissed the case.

According to Kent, the U.S. State Department spent $500,000 in taxpayer money in an effort to help recover the $23 million from Zlochevsky. In an attempt to chase down the loose ends after the case was closed, Kent visited the prosecutor general’s office in Ukraine on Feb. 3, 2015. Kent said he spoke to a “deputy prosecutor general named Donylenko,” who told him that the Zlochevsky case was closed after someone at the prosecutor’s office took a $7 million bribe in May 2014. Kent told lawmakers he did not know at the time that Hunter Biden was on the board of Burisma but learned about the issue shortly after.